This is an interview I did with Steve Harris for Norwegian newspaper Dagbladet. Read it here (roughly edited google translate below). 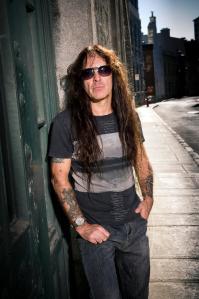 When asked asked if the summer tour would follow the same setup as the North American leg, Steve replied, “for the most part, but there might be some slight changes”. Now there is something for you to chew on!

Steve’s favourite from his solo album is “This is My God”. Enjoy!

– Nobody is allowed to mess with my music. I am still of the belief that the musician knows best. The creative work is our department, then the other ones can carry on with their jobs.

Steve Harris is widely known for his uncompromising attitude. As a teenager the Leytonstone-boy played football for West Hams junior teamt at Upton Park. That was until he discovered the bass at the age of 15 years. At first, he played in various groups in London’s East End until he one day realized he couldn’t be bothered to play other people’s songs anymore.

On Christmas Day, 1975 he formed Iron Maiden. Barely 40 years later, the band have sold 85 million and toured stadiums worldwide. When most others would count their pension, Steve Harris has found the time right for a solo debut. “British Lion” is mostly porduced by the man himself.

Is it scary to back out there on your own this time?

– That’s scary in a good way, if that’s the case. You always want things to be as good as they can be and then you have to have a little pressure. It’s important to be willing to take some risks. Iron Maiden could have imploded back in 81 when we replaced singer Paul Di’Anno with Bruce Dickinson. But you need to follow your heart and instincts, adds Harris.

According to Steve, he’s been working on “British Lion” for 20 years. Why has it taken so long?

– I met vocalist Richard Taylor and guitarist David Hawkins sometime during the 90’s. We started to play with some ideas and it worked out very well. Obviously touring and recording with Iron Maiden takes a lot of time, so the project fell apart several times. But it was clear something had to be done with these songs sooner or later. They were simply too good to just leave them there, Harris muses.

Down to Earth
Harris is known for his big, epic songs, often with historical or mythological themes as the backbone. Grand tales about Alexander the Great, thunderous war epics and rewritings of the romantic poet Samuel Taylor Coleridge’s poem “Rhyme of the Ancient Mariner” rages high on his list of achievements. “British Lion” is however a more back to basics effort with short and effective songs with a more down to earth lyrics.

Did you feel the need to find a different outlet for your creative ideas than Iron Maiden?

– No, no – it was never anything like that. I do not write after a formula. Iron Maiden songs are often long because the songs require that approach. Sometimes you add, while other times it is better to take away. These songs feel natural the way they are. Every musician has his own style anyway and that will eventualy make it sound different than what it would have with Maiden anyway.

I learned that the rest of the Maiden guys were not informed?

– Well, they probably had some sort of ide, but I don’t want to bother them with everything I do. Everyone has their life – Bruce and Adrian does their thing all the time, so there’s nothing to make a big fuss of. Nicko asked me if he could hear the album. He was very excited and that was fun.

Back to the 70’s
Many have mentioned classic British hard rock bands like Thin Lizzy, Deep Purple and UFO when discussing “British Lion”. Is this some kind of homage to your old childhood heroes?

– You know, I’m glad I grew up in the 70’s. That’s when the best music was made. Some have told me that they hear elements from the 90’s in some of the songs. But the 90’s were to a large extent based on the 70’s. It was when people were most creative, so it fits me perfectly. That people come up with different references tells me that it at least wakes some emotions in people, and that is good. There are all sorts of colors and moods here, which gives the album a good variety, says Harris.

Today Iron Maiden plays large stadium around the world, but it does not scare Harris from going down a few venue sizes.

– It would have been amazing to be ablte to do some gigs with “British Lion”. The guys in the band  are very talented musicians and I have nothing against playing small clubs again. We have not set any specific dates yet – we do not know quite what we have to deal with until we have seen the response to the album, but it would definitely be nice to do some shows.

Love Norway
Although Harris is approaching 60, has a large family to take care of, there is little to suggest that he plans to retire anytime soon.

-We are going out on tour with Iron Maiden again next year. So we’re going to be pretty busy that’s for sure, confess Harris.

And the Norwegian fans has something to look forward to?

– Obviously we have to come back to Norway at some point. I do not know when and where, but we love to play for the Norwegian fans, says an enthusiastic Harris.

6 thoughts on “Steve Harris interview in Dagbladet. “There might be some…””