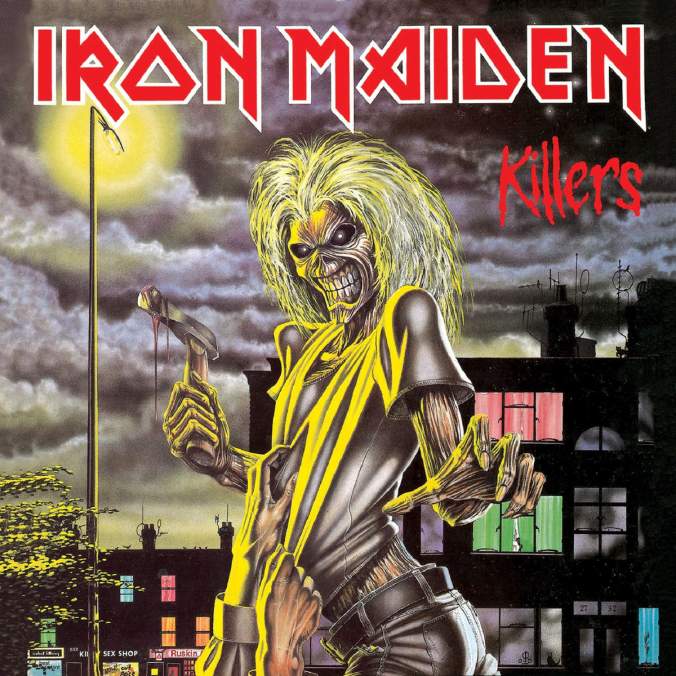 The second Iron Maiden album is the first to feature guitarist Adrian Smith and producer Martin Birch. They would both make one hell of a difference.

After having a bit of a surprise hit with their debut album in 1980, as well as securing high profile support slots on tours with Judas Priest and KISS, Iron Maiden was the young band to watch in 1981.

Click here for our review of the debut album, Iron Maiden (1980)!

Very much a companion piece to the first album, Killers features several songs that were already in the band’s live set much earlier. The big difference between the two records is the quality of the production. Killers sees the arrival of producer Martin Birch, and thus the dawn of the muscular and heavy sound that characterizes early Iron Maiden. The following year’s groundbreaking The Number Of The Beast album might be the first record of Maiden’s classic era proper, but it’s actually on Killers that the quintessential Maiden sound is born.

Artist Derek Riggs shows his early knack for telling bizarre stories in his Maiden paintings, bridging the gap between the first and second albums with Thatcher’s presumed revenge on Eddie, on the cover of non-album single Women In Uniform in late 1980.

Birch took Maiden into Battery Studios in London, working closely with in-house engineer Nigel Green, and proceeded to allow the band the comfort of performing live in the studio. Takes would be locked quite quickly and overdubs added in short order, taking advantage of the well-greased performance routine that Maiden had developed by this point.

Another arrival here is guitarist Adrian Smith, replacing Dennis Stratton and adding his melodic and rhythmic leads to Dave Murray’s virtouso fretwork. Smith’s presence is heard, and even felt, on numbers like the beautiful and semi-accoustic Prodigal Son, and so one of the greatest guitar partnerships in music history finally takes flight. In fact, the album opens with a short instrumental, The Ides Of March, that showcases the Murray/Smith lead work impressively.

There are wonderful metal tunes here too, like Wrathchild, Murders In The Rue Morgue, Purgatory, another instrumental in Genghis Khan, and the galloping title track. On the other hand, there are also some that don’t qualify: Another Life, Innocent Exile and Drifter pale in comparison to the rest. The addition of the competent but unexciting Twilight Zone to the 1998 CD remaster was welcome, as the song was never released on European editions of the original album (nor is it on the recent vinyl, digital or CD reissues), but it doesn’t match the record’s best moments.

Derek Riggs’ artwork for the so-called double A side single of Twilight Zone and Wrathchild.

To accompany the music, illustrator Derek Riggs creates a new Eddie in a murderous mood. The picture disc and black vinyl reissues remind us how striking an album cover could be back in the day, and the picture disc gatefold opens to reveal a live shot of the band in the Killers era. The disc itself boasts the Twilight Zone single artwork on one side and the Purgatory artwork on the other:

Derek Riggs’ artwork for the Purgatory single was his second effort. His first was kept for the next album cover, The Number Of The Beast.

The only proper music video that was produced for Maiden in this early period was for the non-album track Women In Uniform between the first two records. Around the same time the band also filmed their late 1980 performance at the Rainbow in London, which at least enabled them to use Wrathchild for promo purposes:

At this point the Maiden catalog was spent, and for the next record the band would have to come up with all new material for the first time in their career. Killers sees the band emerging out of adolescence and standing on the threshold of adulthood. With the aid of producer Birch, they have found the sound to build this transition on.

Read more about the creation of the Iron Maiden sound here!

The heights that Maiden would climb throughout the decade would have been impossible without a kick-ass metal sound foundation. Birch would be retained as producer for the following year’s breakthrough album, and Maiden never looked back.

Click here for our review of The Number Of The Beast (1982)!

One Bruce Dickinson is on record saying that he thought Killers was a much more interesting album at the time than the debut. It could probably be argued that the ratio of great songs is better on Iron Maiden, but the second album is undoubtedly the birth of the vintage Iron Maiden sound.