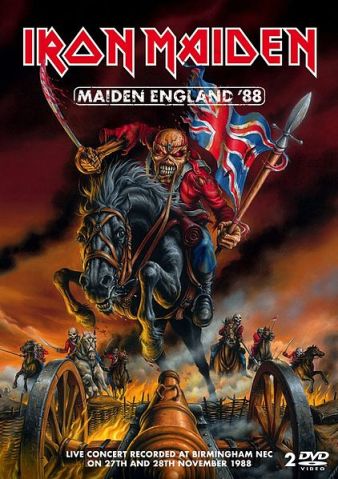 It’s been a few weeks, and we’ve lived with the Maiden England ’88 DVD long enough to decide what we think. From a great concert feature, via zero Somewhere On Tour bonuses, to a frustrating documentary.

The reason for withholding it seems obvious now, with the 2012-13 Maiden England World Tour engaging audiences around the globe. Thus, the retitled Maiden England ’88 is released to coincide with the current global trek.

We’ve previewed it, so let’s review it!

THE FEATURE
The main attraction is obviously the remastered and remixed 1988 concert at the Birmingham NEC, filmed and recorded at the end of the Seventh Tour Of A Seventh Tour, Maiden’s last tour of the 1980s. The Seventh Son Of A Seventh Son album was, and is, one of the very best records the band would ever make, and the subsequent tour had something to live up to.

Maiden had to deliver a show that lived up to the awesome 1988 album, both musically and in terms of the visual production.

The Maiden England ’88 DVD proves that the band rose to the challenge. Capturing the eye-melting awesomeness of the Seventh Son stage show, lights and icebergs and Eddies galore, editor Steve Harris pieces together a concert film that stands proud next to the classic Live After Death from 1985. The remastered picture is good, and Harris’ editing style puts the viewer right in front of the stage, in the thick of the action, effectively giving us front row seats for the culmination of Maiden’s incredible 1980s.

Click here for our feature about the end of the classic era!

Martin Birch purists can still listen to the original 2.0 mix, but the more adventurous viewer is rewarded with an excellent 5.1 remix by Kevin Shirley. There is punch, there is space, there is a well-judged upgrade to everything, and Shirley outstrips the great work he did on the remix of Live After Death.

Bruce Dickinson and Steve Harris on stage at the Birmingham NEC in 1988.

One of the things that leaps at you with Shirley’s remix is the incredible performance by Nicko McBrain. Now that his kick drum can be felt, not just barely heard, and the toms and the snare sound harder, Nicko emerges as the show’s true hero. While Bruce Dickinson works as hard as he can, struggling to sing in the high register of some of the songs, and Harris delivers as expected alongside Dave Murray and Adrian Smith, Nicko gives every track the connoisseur treatment. Just check out Infinite Dreams and Running Free.

THE HISTORY OF IRON MAIDEN, PART 3
We’ve looked forward to this! But Maiden are testing our loyalty when they label a 40 minute teaser-like romp through the 1986-88 era a “feature length documentary” … It isn’t. End of bullshit.

The band are honest and funny as always, and the conflicts are not swept under the carpet, but director Andy Matthews does not trust that the story will hold enough interest and makes the unfortunate decision to drench the piece in quasi-artistic imagery, with the band reduced to talking through a little box about one sixth of the screen’s total size.

There is also an example of the typical Maiden fact-checking-failures, tellingly from the mouth of manager Rod Smallwood himself. Rod brags that Seventh Son Of A Seventh Son was conceived, written, recorded and released in just six months. Which is pretty much correct. He is also really impressed that it was released just six months after the Somewhere In Time tour ended in November 1987. Which is completely false. That tour ended in May 1987, as the graphics on screen tell us while Rod is talking.

Yes, this is how the third History documentary looks. Tear your hair out.

A real let-down here is the fact that only Rod and the band are talking. The previous installments featured a host of key (and some less key) players in Maiden’s history discussing the past. In this installment we don’t even hear from producer Martin Birch. This is unforgivable when we’re talking about two of the most important studio albums in the band’s history…

In fact, you might find more info about the making of Somewhere In Time in this recent Maiden Revelations feature about the end of the classic era.

In any case, the story will continue. The end of this documentary-ish featurette gives us the legend “to be continued”, and one can reasonably argue that the new documentary aesthetic will sit somewhat better with the early 1990s and the forthcoming Donington Live 1992 DVD.

BONUS FEATURES
The set includes 12 Wasted Years, Maiden’s first feature-length documentary from 1987. Frankly, it’s redundant at this point, with some of the footage, and all of the info, already present in the first two installments of the new History series. Good for the sake of completion, but nothing more. In no way does it make up for the lack of live footage from the Somewhere In Time era.

The 1986-87 world tour will remain a black hole in Maiden’s DVD history.

For this is the sticking point. With the Maiden England ’88 release out, we can be pretty certain that the band is not in possession of unreleased concert footage from the 1986-87 tour beyond the snippets included in the documentary. Beyond that, there is no footage from Donington 1988 either, a show that was certainly both filmed and recorded. If the band has given us all they’ve got by now, the 1980s are officially spent.

Which means that live footage from the 1986-88 period, apart from the Birmingham concert, is limited to the promo videos that round out this DVD set, the singles from Somewhere In Time and Seventh Son Of A Seventh Son.

A great feature, disappointing extras. The concert itself deserves at least 5/6, particularly on account of the brilliant Shirley remix, but in light of what this DVD package could have been…