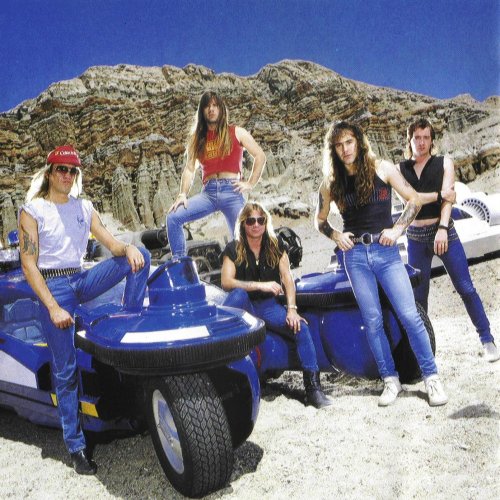 In 1987 Iron Maiden fan Richard Diaz got his mind blown but still managed to distinguish Dave Murray from an ice cream vendor. Read on to relive the excitement of a different time in Maiden history, as the Somewhere In Time world tour hit Corpus Christi in Texas.

I was recalling this story to a buddy and he suggested I write it down before I forgot anymore of it, so here goes. Hope someone enjoys it!

I was just out of high school and in my 1st semester at the local college when the stars aligned to finally allow me to go see my favorite band and all-consuming passion, Iron Maiden…live! I live in South Texas and the closest they were coming to my hometown on the Somewhere In Time tour was Corpus Christi. I finally had some cash from working at a supermarket so I could buy my own ticket and not have to ask my mom who had turned me down since the Number Of The Beast tour where they also played Corpus with Scorpions and the Piece Of Mind tour when they played there with Saxon. I felt like The Prisoner fighting against the world…

My friends and I planned and plotted for the gig, we ordered tickets over the phone using my friend’s mom’s credit card after we gave her our hard earned dollars. We saved and pitched in for gas, we even discussed which t-shirts we were wearing on the drive up so as not to have any duplication! We were like children on the week before Christmas as the days to the gig grew shorter. It got to the point where we didn’t discuss it too much for fear of something “jinxing” the event but we all knew very well what was coming up and I assure you none of us thought of anything else!

Maiden’s latest record was Somewhere In Time, released in October 1986.

To really appreciate this story you have to keep in mind that this was the mid-1980s. You had to pay hundreds of dollars to belong to a “video rental club” for the luxury of renting Beta and VHS movies (Maiden’s Video Pieces on BetaMax was the first time I ever saw Maiden in action as in physically moving!) and watching them on a VCR the size of a suitcase. You learned of news regarding your favorite bands from magazines like Circus and Hit Parader which were printed a month in advance, maybe an occasional 30 second news item on MTV, and that was IT!!! Try to imagine that if you are a young person who has grown up with the internet…

My friends and I knew Maiden from the album sleeves, the posters on our walls and the hundreds of photos in magazines. The thought of seeing my heroes actually moving let alone performing in all their glory was so mind-blowing I can only compare it to a person living 200 years ago being told that they could fly through the air and visit far off lands in only hours as we do today!

The very thought of seeing this in real life was nearly impossible to comprehend for a young fan in the mid-80s.

Off our caravan went in 3 cars early that Sunday morning, February 1st 1987. I did not want to hear any Maiden on the trip up as I had stopped listening a week before to starve myself and give me the maximum elation when I finally heard them, so I think we listened to Judas Priest and Cinderella on the 3 hour drive.

The caravan departed for CC in the early morning on Sunday, and as we neared the venue we saw the Memorial Coliseum which was a concrete dinosaur of sitting right next to the Gulf of Mexico. Corpus Christi was cold and cloudy and really not very festive that day. 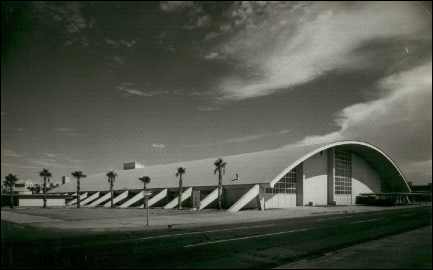 The Memorial Coliseum in Corpus Christi had a capacity of about 3000. It was demolished in 2010.

Not that this had any effect on me and my friends. We we were ecstatic knowing we were about to see Maiden live. We arrived at the site about 3pm more and one thing I remember is there was a big cyborg Eddie cut-out on the marquee that faced the back of the venue which I thought was so cool. It’s one of the little touches that I think not all bands do that makes a difference. All afternoon long people driving behind the venue were awestruck staring at the giant Eddie and many were honking their horns at us in the parking lot. Just a little human touch that gets lost in today’s world IMHO!

Now as we get closer to 6pm what do I spy but an ice cream truck pulling up to the door on the side where we were parked, with big megaphone speakers and neon colored ice cream cones painted on the side…

I had been watching this entrance closely because I suspected it was the way the artists would enter the venue, and out of the passenger side of the truck I saw Dave Murray emerge in shades and jeans!!! So certain was I that I immediately started shouting “Dave! Dave!” and he turned around and waved to me as I waved like a lunatic.

My friends (being the good friends they are) immediately cracked up and thought I was just giddy from the excitement…that I had probably gone nuts over an ice cream vendor…but I know it was Dave and I now have reasons to support that theory!

About 7pm we go to the same entrance where Ice Cream Man / Dave entered and a small crowd has formed. Sure enough the members of the Vinnie Vincent Invasion are getting off a station wagon and going into the gig. Now I was the only one with the foresight to bring a pen and tablet to the show so all these guys were asking to borrow some paper and my pen. Dana Strum, the bass player for VVI is really tall and pale! I distinctly remember a dude asking if he could have the pen that Dana Strum had been using and it made his day when I said yes.

It was about this time that two of my friends came back from the 7-11 which was about two blocks away, and what do they tell me? “Dude, we just saw Steve Harris buying baby food at the 7-11!”

My buddies were wide eyed with excitement as they told me that when they were trying to buy beer (we weren’t of age yet, 21 was the legal age in Texas) that a huge guy walked in checking the place out. They thought it might be a robbery about to take place but the big guy then opens the door for a young lady pushing a stroller with a baby in it, and behind her comes a long-haired guy also holding a baby. The guy takes off his shades and it’s none other than ‘Arry!

Steve Harris on the right. Bodyguard on the left. Wife and baby out of sight.

My buddies watched awestruck as ‘Arry and his wife walked through the aisle and picked out jars of baby food. They said they were stunned because Steve appeared to be no taller than any of us and we were all not particulary tall, and how they seemed to be a simple nice couple out with their kids. We imagined Steve’s home life as feasting on suckling pig served by a harem of Metal groupies while Eddie stood guard over his castle…

My buddies asked the big guy if they could meet Steve as he was acting like a bodyguard and he said to them “He’s with his wife and kids man, you can see him at the show.” My buddies were saddened by this response and I too didn’t expect that from Maiden but I understand in hindsight.

We made our way to our seats, which were terrible, but we were naive and happy to be in the same building as our heroes! Vinnie Vincent came on and each song sounded the same. They were nice enough but we all knew why were here…I feel a bit sorry for bands that open for Maiden because it’s really out of politeness that most people pay them any attention. We are there for one reason: Maiden!

Vinnie Vincent. Not why Richard and his friends were there.

The lights came back on after the Invasion and my buddies pointed out the bodyguard they had encountered earlier who was now standing by the mixing board area and he was a huge muscle-bound guy right out of a Manowar album sleeve!

The minutes seemed like hours as we all realized it was soon going to happen.

…the lights went out and we could feel a rumbling in our gut…a deafening rumble…like an earthquake…and then a theme blared out of the PA, futuristic and majestic as if announcing the arrival of something other-worldly…and then neon signs started to blink and stars twinkle as the cover of Somewhere In Time came to life in front of our eyes!

The opening strains of Caught Somewhere In Time ring out and we prepare for our journey! Amidst explosions and blinding lights the lads appear at the foot of the stage wielding their instruments with ferocity and Bruce races to the front bedecked in an amazing costume pulsing with lights, a cosmic master of ceremonies.

I was in ecstasy.

The place went haywire! Forgotten was the grey gloomy weather outside. Inside the arena Maiden ruled supreme! And we in our nosebleed seats were as happy as anyone in the front row! 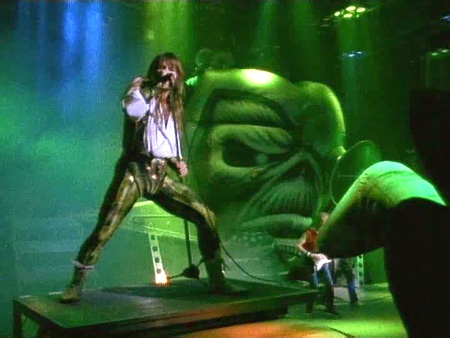 All too quickly the time comes for Heaven Can Wait and Eddie appears at the corner of the stage! In full robot gear he stands, and after taking a few steps Eddie lurches and…starts to tumble…then weave back and forth…then before thousands of Maiden fans the unthinkable happens: Eddie collapses to the floor! He falls like a tall proud oak onto the stage while Bruce is behind a machine gun turret on the 2nd floor of the stage, shooting out fog and steam at Eddie while his laser gun poins helplessly in the air.

Then a small army of roadies scurried out onto the stage and somehow lifted Ed back onto his feet. The crowd was a bit shocked and cheered at Eddie’s recovery, and the night went on. At the end, I don’t remember if it was Running Free or Sanctuary, Bruce pointed at the nosebleed seats and said “You! You get up off your seat!”, and I swear it seemed as if he was looking right at my buddy in his silly-looking David Lee Roth shirt (the one where he is painted like a jungle native)! To this day we all joke about how Bruce called him out. But I have since seen how Bruce believes in treating the audience this way, and it is a tribute to his stage mastery that he could do that.

After the boys left the stage the arena remained dark and there was a recorded quote over the PA that I remember being from Star Trek about “Space…the final frontier” and the thundering sound of engines over the PA presumably being spacecraft engines. We had been taken to the stars and back!

As we made our way back to our cars we were spent and elated. We had seen our heroes live and had an adventure to last a lifetime. We listened to Fates Warning‘s Awaken The Guardian album on the ride home and dreamt of far off places.

Because now those places were possible!

Somewhere in Texas 1987. Richard was there.

7 thoughts on “FEATURE FRIDAY: 30 years ago, Somewhere in Texas”