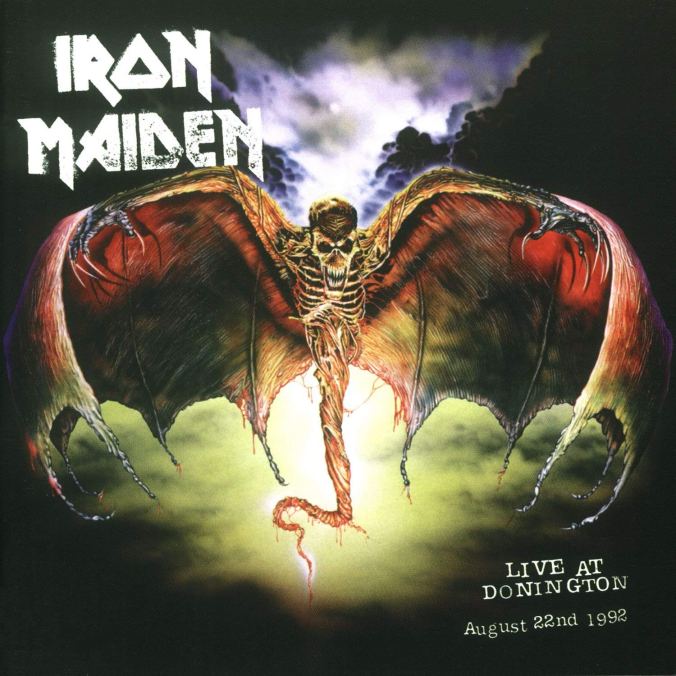 Live album fatigue sets in with the third (!) concert release of 1993. But the last record out of the gate is also the best of them, for two important reasons.

As Steve Harris was looking for a new Iron Maiden singer in late 1993 he was also cleaning house, releasing Maiden’s triumphant 1992 Monsters of Rock performance on CD, vinyl and video. This capped a year that had already seen the release of two new live albums. In light of how traumatic singer Bruce Dickinson’s exit from Maiden that year had been it is impressive that Harris even mustered the energy to listen to the recordings, not to mention actually mixing them for release.

Live At Donington consists of the entire set that the band performed at Castle Donington, and thus we actually get the Fear Of The Dark (1992) show in its entirety. This is the first strength that lifts the album above its two immediate predecessors in 1993. It’s just a pity that Harris once again fails to capture the mood and vibe that elevated Live After Death (1985) to classic status, sticking with his garage demo aesthetic in terms of production values. 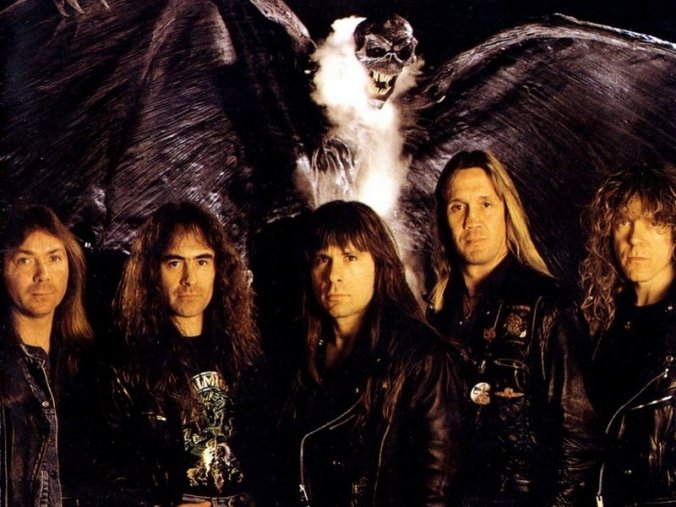 Iron Maiden during the summer of Donington in 1992: Dave Murray, Steve Harris, Bruce Dickinson, Nicko McBrain and Janick Gers. They are seen here with the Mark Wilkinson version of Eddie that would also grace the 1998 reissue of the album.

The Donington album is however a welcome improvement over A Real Dead One because of its emphasis on what was then more recent material, as well as the fact that an entire show is presented as it was performed on stage. Some people obviously like to have many different cities and audiences included on live albums, not least the band themselves, but this writer will always prefer a complete recording that reflects the atmosphere of one particular show.

Opening with a diabolic rendition of Be Quick Or Be Dead, which even includes a fair part of the great atmospheric intro that was omitted from the previous version on A Real Live One, Harris and Dickinson sound particularly fired up and hungry to prove themselves in the era of grunge, and drummer Nicko McBrain has rarely been better. This performance quality is the second strength that puts Live At Donington ahead of its 1993 companions.

Going straight into The Number Of The Beast does nothing to alter this impression. It is miles better than the version featured on the previous live record, and probably one of the best performances Dickinson and Harris have ever given of this track. Songs like Tailgunner and The Evil That Men Do also showcase a singer on superior form, and even the not very concert-friendly Wasting Love finds its feet.

The album was originally conceived and released as a cheap and simple limited edition, featuring the soundtrack to the late 1993 concert video Donington Live 1992.

The video that this record is paired with, for some reason labeled a little differently as Donington Live 1992, is easily our least favorite of all the Maiden concert videos. The paradox is that the video is overly pretentious and artsy, while the audio is what Harris wants it to be: thin and dry.

Another paradox is that in cherry picking single performances throughout a tour, as is the case with A Real Live One and A Real Dead One, Harris is unable to assemble a collection of performances as cohesive and inspired as the Donington concert.

Adrian Smith is still missing though, and the songs suffer for it. Not least Can I Play With Madness, where his guitar and his voice have left a huge gap that the current band’s energy can’t make up for. So it’s very welcome when Smith makes a guest appearance on Running Free at the end of the set. It’s also a glimpse into the future, Iron Maiden putting their first three-guitar performance on record with Smith joining Dave Murray and Janick Gers on stage.

The 1992-93 version of the band, even without Smith, can thrill you when they throw themselves into a beautiful Afraid To Shoot Strangers or an energetic Bring Your Daughter…To The Slaughter. But their lack of sophistication in the wake of Smith leaving is obvious when it comes to performing 80s classics like 2 Minutes To Midnight and Hallowed Be Thy Name.

With Live At Donington the curtain came down on the most crucial era in Iron Maiden’s history, the 12 years in which they had been fronted by Bruce Dickinson. 1993 saw him leave the band painfully, the release of three live albums and one concert video, and hundreds of tapes of hopeful singers sitting on Steve Harris’ desk.

But the Donington recording was not a triumphant send-off. With a proper production, and maybe a better studio than Harris’ own Barnyard, this record might have been the live album fans were waiting for in 1993. Harris did sadly not rise to the challenge. If this material was engineered and mixed by a professional engineer (Martin Birch had retired, but others could have done it) and given priority over the piecemeal approach, then Maiden fans would have been spared the pain of being exposed to three below-par live albums in less than nine months.

The Harris production problems would continue on The X Factor (1995).

As it is, actually having the complete show makes for a more interesting package than either of the previous two. And the band’s energy lifts the recording, powered by a strong Dickinson performance. Maiden would come to miss him.