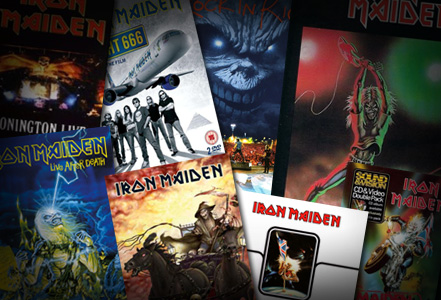 Let us take you on a short and sweet tour through Iron Maiden’s concert films. Find out which we love and which we despise!

The only criteria for inclusion in this guide is that the film is an official concert video recorded and released by Iron Maiden. It follows that the 1983 Dortmund show from the Piece Of Mind tour is not included, even though it is featured on an official history DVD, because it’s simply a TV program not intended for release as a concert film at the time. And it leaves out huge 1983 live numbers like Where Eagles Dare and To Tame A Land…shudder.

We wish Maiden had decided to film and release their Piece Of Mind show in 1983. But they didn’t. So we never got a live video titled World Piece, or something cool like that.

The Beast Over Hammersmith London show from the previous tour, on the other hand, was intended for release but cancelled at the time and later made available in heavily edited form. So, it’s included here.

Read on for love and hate, fanboy style!

LIVE AT THE RAINBOW
Available on The Early Days (2004)

Torgrim: Seing Maiden live on stage this early in their career is obviously a treat. However, this 30 minute long recording from the legendary Rainbow Theater only reveals half the truth. The band looks a bit wary of the fact that they’re being filmed and plays it safe. The lighting and editing is also a bit off. It’s interesting to see how Dave Murray’s wristband mysteriousely disappears from time to time. 3/6 (OK)

Christer: The height of the Paul Di’Anno era! It’s short and excludes many of the early greats that were performed in concert at this time. But it was really not common at all for bands to release a concert video after just one album, so Maiden were kind of avantgarde back then. Check out the very lame pre-album lyrics in Killers! 4/6 (Good)

We look at the birth of the Maiden sound in this feature!

BEAST OVER HAMMERSMITH
Available on The Early Days (2004)

Torgrim: Musically Beast Over Hammersmith is one everlasting triumph (of steel). Performance-wise the band is absolutely on fire and the energy level and enthusiasm is breathtaking. This is five guys ready to put a torch to everyone and everything in their way. Listen to the magnificent renditions of The Prisoner, Children of the Damned, Murders in the Rue Morgue and the obscure Total Eclipse. The picture quality is not top notch, but what a band. So inspired! 5/6 (Great)

Christer: This is Clive Burr at the top of his game, before the problems that occurred later in the tour and cost him the gig. This is also the ultimate live document of Maiden’s early days, including an incredible performance by new singer Bruce Dickinson. Check out Hallowed Be Thy Name! The show is unfortunately not presented in its entirety, but it rocks like there’s no tomorrow. Absolutely classic, but sadly incomplete and thus missing several highlights. 5/6 (Great)

We hail the early classic era in this feature!

LIVE AFTER DEATH
Available on Live After Death (2008)

Torgrim: There is no denying that the World Slavery Tour changed the life of both Iron Maiden and the metal world in general. It raised the bar on every level, performance- and production-wise, the sheer drama and the musicianship. Apart from a slightly worn out voice on Bruce, this document captures everything in all its pride and glory. A true classic in every sense of the word. 6/6 (Masterpiece)

Christer: Magic! From the Aces High opening, through the monumental Rime Of The Ancient Mariner, to huge mummy Eddie shooting fire with his eyes. Who cares if Bruce struggles to sing properly? 6/6 (Masterpiece)

We hail classic era guitars in this feature!

Torgrim: The line in Infinite Dreams where Bruce Dickinson sings “There’s got to be just more to it than this / Or tell me why do we exist / I’d like to think that when I die I’d get a chance another time” is probably my favorite Maiden moment of all time. It kind of sums up the whole grandness Iron Maiden was all about at that time. Technically speaking, it’s probably the most advanced and eye candy-stuffed stage show they’ve ever put on. And Steve Harris has done a great job of capturing it all in the editing. The sound is a bit on the off side, with too little low end and perhaps a tad too much “clank” in Mr Harris’ bass. Bruce’s voice has also taken some beating from all the touring. That being said I think this might be Nicko McBrain’s best performance with the band. The tempos are a bit all over the place, but I‘ve never heard him this playful. All in all Maiden England is a great round-up of the latter half of the 80’s splendor. 5/6 (Great)

Christer: Maiden nails it again! As a companion to Live After Death, this is perfect. We missed out on a proper recording of the previous tour, the 1986-87 Somewhere On Tour, but this Seventh Son era film comes close to making up for it. Epic stage production, epic setlist. Highlights include a phenomenal rendition of Infinite Dreams. Watch this and you’ll understand the fans’ outrage at that song’s exclusion from the 2012-14 Maiden England tour. This show was given a really great audio boost for the recent DVD release. 6/6 (Masterpiece)

We discuss the late classic era in this feature!

DONINGTON LIVE 1992
Originally released on VHS in 1993
Will be released on DVD in the future, according to Rod

Torgrim: It spawned one of Iron Maiden’s greatest hits of all time, Fear of the Dark, although the actual soundtrack for the single was recorded somewhere else, the video was lifted from Donington. It’s obvious that they’re trying to do something new, modern and fresh, but they fail for the most part. The slow-mo sequences are unbearable after a while and the same goes for the black and white edits. It’s simply impossible to get a true feeling of the concert. The setlist is a fine summary of their career, but the performance and sound mix are dreadful. It’s kind of ironic that Adrian Smith turns up in Running Free at the end of the set, because his absence in the Iron Maiden live sound has never been more revealing. 2/6 (Disappointing)

We discuss the 1990s stage productions in this feature!

Torgrim: Many view Rock in Rio as the equivalent of Live After Death for the younger generation of Maiden fans. The massive sea of people is a sight to behold and it definitely bodes for a great atmosphere. Songs like Sign of the Cross, The Wicker Man, Fear of the Dark and The Clansman all come to life in the most brilliant way. I find the stage production a tad uninspired and some of the camera angles annoying. The band is in great shape though and it marks a triumphant return for the recharged 2000 era Iron Maiden. 4/6 (Good)

Christer: Understandably, there were no concert films released during the Blaze Bayley era in the 1990s. But with the return of the irreplaceable Dickinson and Smith, it’s back to business as usual, and despite a less-than-adventurous setlist this Rio performance is one of the best the band has ever recorded. 5/6 (Great)

We discuss Maiden’s love affair with Brazil in this feature!

Torgrim: In my book Death on the Road is a terribly underrated gem in the Maiden DVD portfolio. There is a mood here that you won’t find in any other of the shows they’ve put out. The gloomy atmosphere and the way the set is paced, combined with the most adventurous post-reunion stage production to that point, sets the tone for a different experience of new and old songs. In particular the renditions of the album tracks Dance of Death, Paschendale and Journeyman makes them stand out as full-fledged Iron Maiden classics. 5/6 (Great)

Christer: Some fans really hate Harris’ editing of this concert, but I have to say I like it. I get used to the fast cuts after a couple of tracks, and the visual aesthetic seems to suit the show and material really well. Problem: The older songs featured in “album tour” setlists have become predictable at this point (with the exception of Lord Of The Flies), which leaves the brand new Dance Of Death material as the interesting bit. The absolute highlight is an incredible acoustic performance of Journeyman. 4/6 (Good)

Torgrim: The documentary which was the real purpose of this release is absolutely brilliant. The concert part as a stand-out feature is not that intriguing. Mainly due to it being recorded on different locations, so you don’t get the feeling of attending a full show. And the other thing is that it lacks much of the decor and showstoppers that was instrumental in bringing this show to life. The Anubis cats, the dogs, the big Eddie and the back-lit hieroglyphs. However, this version of Revelations must be one of Bruce’s best performances ever. Goosebumps. 4/6 (Good)

Christer: That’s right, this is the cover artwork that should have been! Completely killer versions of 1980s classics like Revelations and Powerslave abound. The package is only let down slightly by the fact that the shows filmed are NOT featuring the full stage production of this awesome World Slavery Tour recreation. That’s frustrating, but the music and Kevin Shirley’s mix kicks serious ass. 5/6 (Great)

We discuss Maiden’s history tours in this feature!

Torgrim: The palette of Maiden classics chosen for album tours is getting alarmingly tedious at this point. Most of them have been featured on more or less all the post-reunion DVD releases. The set and show combined is the most uneventful thing Iron Maiden has ever filmed. It lacks energy and momentum. There is not a whole lot going on apart from the two obvious Eddie appearances. The split screens are a new experience, but it gets old fairly quickly. The redeeming factor is that it sounds great, The Talisman has star qualities, and this version of 2 Minutes to Midnight actually comes across as fresh and inspired. 3/6 (OK)

Christer: Bruce’s incredible performance of The Talisman is worth the price alone! Apart from that, oldies are as predictable as ever, which is now becoming a serious impediment for the “album tours”. And the band once again films a DVD during a leg where the full stage production is not used. I don’t care that much about the fans in attendance, I want the show! 3/6 (OK)

THE BOOK OF SOULS: LIVE CHAPTER (2017)
Available on YouTube

Christer: Well, we got our wish about having a film of the complete stage production, and this production was a nice surprise for those of us who got a little disillusioned by the Final Frontier and Maiden England tours. One of Maiden’s coolest stage shows, a revitalized band, and even Children Of The Damned revisited. It would have sounded better with Shirley mixing it, Tony Newton works a little too close to Harris’ own 90s ideal for comfort, but it’s a good watch. 4/6 (Good)

Are we on, are we off? Have your say in the comments.