Bruce Dickinson decided to make a band. His own name would fade into the background, while Skunkworks took center stage. How did Dickinson’s biggest solo gamble turn out?

If you ever wondered how much Bruce Dickinson craved to fit in with the times in the mid-1990s, you need only check the CV of the producer he chose for Skunkworks: American wunderkind Jack Endino, much celebrated for producing early works by the likes of Soundgarden and Nirvana.

Bruce hooked up with Seattle producer Jack Endino to make an attempt at creating the start of a Skunkworks band. It was, but also the end.

The first tentative steps down an alternative road were taken during the making of the album that saw Dickinson leave Iron Maiden, the merely OK Balls To Picasso in 1994. The record saw him searching for a different sound by which to be known as a solo artist. After consolidating his new band with 1995’s Alive In Studio A, the singer’s quest intensified with Skunkworks.

Dickinson had made no secret of his urge to be the anti-Maiden, which in the mid-1990s would mean being at the other end of the spectrum: The music that is cool, with the times, doesn’t have a following from the 80s, but does have a following of music journalists that will brand your work important in the here and now.

Space Race kicks it off. It’s a fairly enjoyable ride, the band sounding on fire and Dickinson’s voice doing what it did for Maiden: lifting off. The best song on the album is up next, Back From The Edge. On this track Dickinson and his band touch on something that they would never be able to recapture: A truly soaring climax of melody and groove.

They were there, and then they were gone.

The paradox of the Skunkworks album is the sound of young musicians working so hard to do their own thing, only to be restrained by the older singer who sets down the parameters of what they can or cannot do.

There is both finesse and energy in the performances of guitarist and co-writer Alex Dickson, bassist Chris Dale and drummer Alessandro Elena, but it is ultimately Dickinson’s desire to be something he never was that dooms the record to an obscure existence as a one-off project. 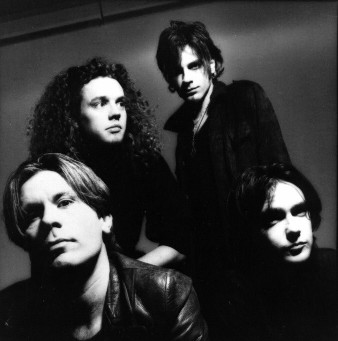 Interestingly, it is also possible to hear signs of something that would have been good Iron Maiden here and there throughout the album. Dickinson’s desire to explore is not to be mocked, but it is striking how certain moments on the album could be conceived as Maiden material, like the best parts of Inertia:

Unfortunately, most of the album is self-absorbed. It sounds very much like a great artist getting too interested in how he is perceived. Let there be no doubt, Bruce Dickinson is a great artist. But he is not insulated from two important factors: The people around him, and the purpose with which he attacks his current project.

It’s not good feeling sorry for yourself. And it’s no better to openly resent your own history, even if it’s understandable why Dickinson felt a need for change.

Setting Inside The Machine and Headswitch back-to-back on this record makes the point. Both tracks are performed without fault. But they have zero weight. There is no way for anyone to get interested unless we are already interested in what Bruce does.

Obvious Pink Floyd vibes in the cover artwork by the inimitable Storm Thorgerson.

The 2005 expanded edition of the album adds a disc of bonus material. It gives a telling impression of the Skunkworks project as it fluctuates from silly b-side fillers to seriously fired up live performances. Inertia in particular tells of a band with purpose, but their take on Maiden’s The Prisoner is sadly hampered by guitarist mismatching.

Dickinson couldn’t seem to get his solo career off the ground, never delivering albums that were more than OK, never really taking flight. Something had to change. In order for Dickinson the artist to find himself, commercial aspirations had to be put aside. As the Skunkworks band project fell apart in 1996, it would be Roy Z that provided artistic deliverance and a clear course for the future: the heavy metal riffs that ultimately became the Dickinson comeback album Accident Of Birth in 1997.

Like Balls To Picasso before it, Skunkworks fails because of its desire to be important and serious and in-vogue. Mostly it is Dickinson’s singing that lifts it to the status of mediocre. As a statement of intent, the album sounds overly calculated and is therefore utterly disappointing.