Iron Maiden are set to headline Download festival on June 15th next year. This marks the fifth time the band has headlined at Donington. In this clip Bruce discusses the forthcoming show and celebrating the Seventh Son of a Seventh Son era.

In respons to the question about whether or not we can expect to hear Afraid To Shoot Strangers at Donington, he hesitates and says that you never know what happens when the band start rehearsing and that they “may have a change of wind”.

As some are speculating that Afraid Shoot Strangers replaced the fan favourite Infinite Dreams in the last minute, this might fuel some hope that there will be a change of mind in regard to dropping this ridiculously underplayed classic.

The photo underneath is a screen grab from the offical Maiden England West Coast Tour report, which shows the featured programs from the lighting desk. Evidently Infinite Dreams and Hallowed Be Thy Name were a part of the pre-productions, but never made it to the tour premiere in Charlotte, Atlanta.

It seems likely that Afraid To Shoot Strangers got Infinite Dreams’ spot in the set, while Hallowed Be Thy Name might have been replaced by Running Free. 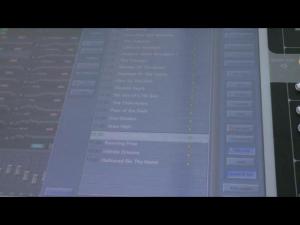