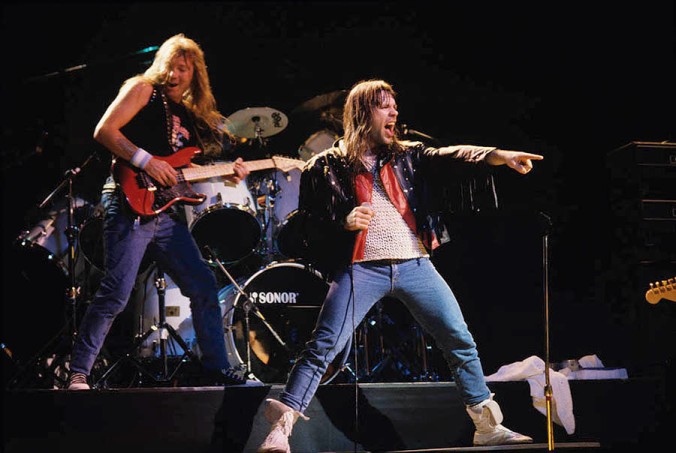 Some Iron Maiden tours are less well documented than others. Here’s a bootleg concert video from Philadelphia on the No Prayer For The Dying tour in 1991.

It was a new decade, and Iron Maiden had gone from Adrian Smith to Janick Gers. Their new album No Prayer For The Dying (1990) didn’t set the world alight, but it did show that Maiden had every intention of staying relevant in the 1990s.

Their new world tour ditched the conceptual set designs and special effects in favor of a stripped-down back-to-basics set-up with Marshall stacks flanking the drum riser. It might have been necessary as a reaction to the massive 1980s stage productions, but it had the inevitable effect of signaling that Maiden weren’t all that big anymore.

Maiden in jeans, making a conscious effort to distance themselves from the massive stage productions they had become known for in 1984-1988, and probably also to save money.

After completing a European tour in late 1990 the band headed for America. The hope might have been that the more aggressive sound and stripped-down production would resonate with a continent that was in the grip of thrash and about to get into grunge. Here’s a bootleg video of the performance in Philadelphia on 29 January 1991:

You can also go track by track from here:

INTRO: 633 SQUADRON
TAILGUNNER
PUBLIC ENEMA NUMBER ONE
WRATHCHILD
DIE WITH YOUR BOOTS ON
HALLOWED BE THY NAME
22 ACACIA AVENUE
HOLY SMOKE
NO PRAYER FOR THE DYING
THE CLAIRVOYANT
2 MINUTES TO MIDNIGHT
THE TROOPER
HEAVEN CAN WAIT
IRON MAIDEN
THE NUMBER OF THE BEAST
BRING YOUR DAUGHTER…TO THE SLAUGHTER
RUN TO THE HILLS
SANCTUARY

The band played The Assassin and Hooks In You on either side of No Prayer For The Dying on the European leg of the tour. Here’s bootleg footage of the Dortmund show on 21 December 1990:

The Prisoner and The Evil That Men Do also appeared at a few shows in 1991.

A new decade had dawned, and Maiden took certain measures to position themselves. How it worked or didn’t work is an interesting point of debate. How do you all feel about the 1990-91 live performances?

Click here for an in-depth look at the making of No Prayer For The Dying, the album that saw Adrian Smith leave Maiden and Janick Gers join in his place!

8 thoughts on “FROM THE VAULT: Live in Philadelphia 1991”