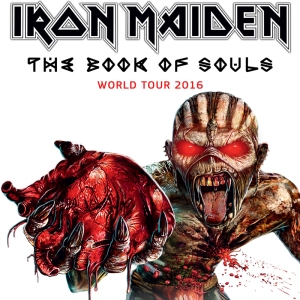 As promised, Iron Maiden return to Canada on the 2016 The Book Of Souls World Tour.

This will be Maiden’s first visit to Canada since the beginning of the Maiden England tour back in 2012. But this time they are only playing 4 cities, as opposed to the last tour’s 9 cities. So many Canadians will have to travel to one of the following:

It can be noted that the shows at Toronto’s Air Canada Centre and Vancouver’s Rogers Arena have slightly higher attendance capacities than the venues performed on the previous tour. But overall there will be less Maiden for Canada this time around.