What’s the setlist? How does the new merch look? What are the band wearing? How do they sound? And last but not least – what the f**k is Eddie up to? Find out by following our live updates from the the frontline in Sunrise, Florida! Here is Iron Maiden‘s The Book Of Souls World Tour premiere minute by minute, song by song! #SPOILER

On Wednesday, February 24, Iron Maiden kick off one of their most ambitious tours ever. The massive The Book Of Souls World Tour will take in six continents, playing over 70 shows in 35 countries over the course of roughly 6 months.

Maiden Revelations is there on opening night to give you first-hand information on what’s going on in Florida as it happens. We are going to the pre-party. We will post photos from outside and inside the arena, checking out the merch and the fans. We will show you pictures of the show in progress and tell you what they play, track by track. All the spoiler information you desire will be reported here in more or less real time!

What time, you say?! Sunrise, Florida is UTC/GMT -5 hours. To find the current local time you can click on this link. Figure out where you are in time and sync up! Maiden is usually on stage about 8:45 pm local time wherever they are, but we will follow the action in Florida all through the day.

Chris will do the editing and write-ups, while Torgrim will be reporting from Sunrise and the BB&T Center. Bookmark this page, stock some Troopers, get your Maiden music ready, and keep refreshing this page for updates!

Aftermath… Another Maiden tour is finally under way. Torgrim is staying in the US to see another gig in Vegas. Meanwhile, Chris is chewing on the set back in Norway. This is what Iron Maiden performed on opening night:

The leak from China was not far off. But this certainly seems to be a better set. Not least because Powerslave is in it! The three songs off Brave New World seemed the strangest thing in the leak, and only Blood Brothers showed up. It’s high time Maiden shook up their encore a little bit, and this certainly counts. How about Wasted Years as set closer? The song has been played a lot in recent years, but it makes for a refreshing change here in place of Running Free or Sanctuary. It’s also worth noting that the band avoided Run To The Hills, 2 Minutes To Midnight and Wrathchild.

Biggest triumph? Has to be the performance of Bruce Dickinson. Just check out Torgrim’s review of opening night in Sunrise, Florida!

11:20 pm. The show is over. Thank you so much for following us on Maiden’s opening night! If you’re new to this page, you can go on reading to find out what Maiden played and how it looked. Cheers!

Follow on down from here to witness the new set!

There’s a new animated intro video. And then:

IF ETERNITY SHOULD FAIL
…and Bruce is singing the intro live: 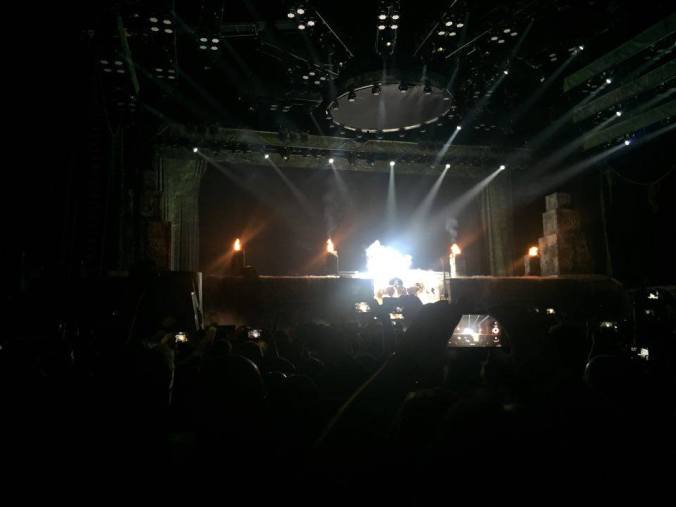 No shit, Maiden are back: 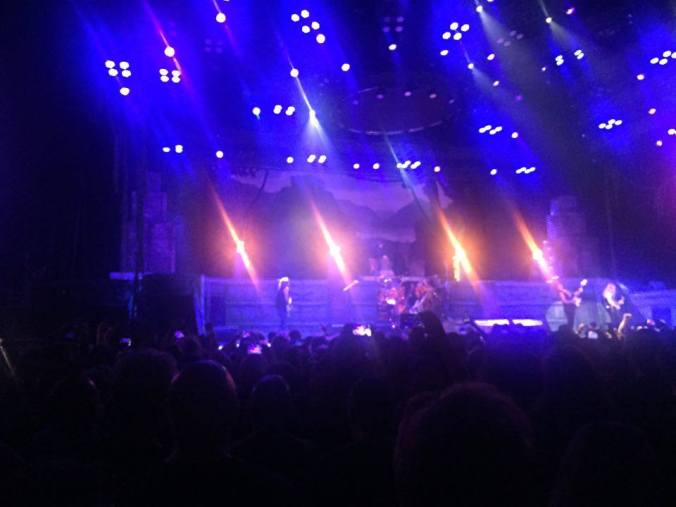 The stage set looks fantastic, and there is beautiful pyro to go with it. But the strangest thing so far is the fact that Janick is playing a Les Paul!

SPEED OF LIGHT
Because that rocks! And Bruce has zero trouble singing the very high chorus. As little trouble as Davey has playing the solo. Bruce talks to the audience after this track. And they go on to play…

CHILDREN OF THE DAMNED
In which Adrian plays an acoustic guitar. Check out the stage right before this track: 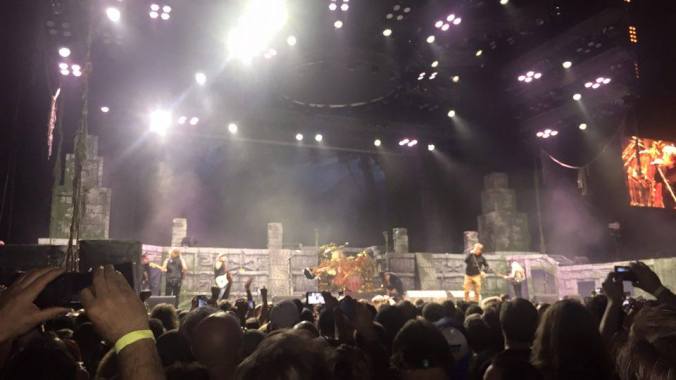 This is a touching moment. The band is playing well, and Bruce is singing well.

TEARS OF A CLOWN
In which this awesome backdrop appears:

Nicko is playing really well. Not that he doesn’t usually play well, but the feel is great tonight. And Adrian nails the solo while wearing blue jeans. What is not to like?

THE RED AND THE BLACK
In which Steve Harris plays a bass guitar intro, the like of which he has sometimes been partial to, under the glare of just the right light: 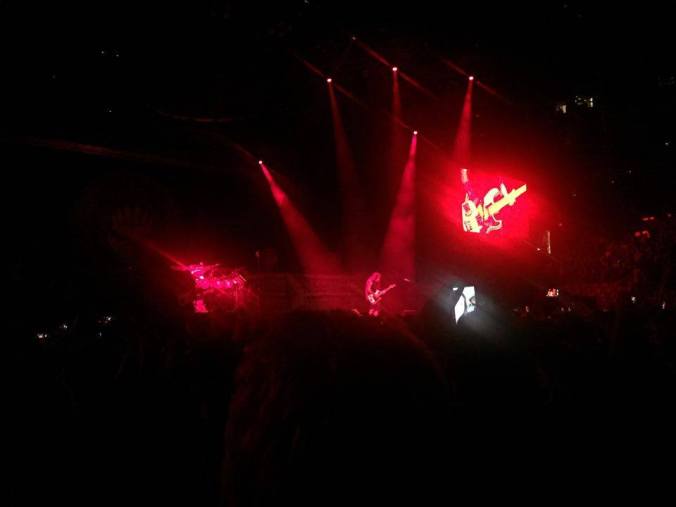 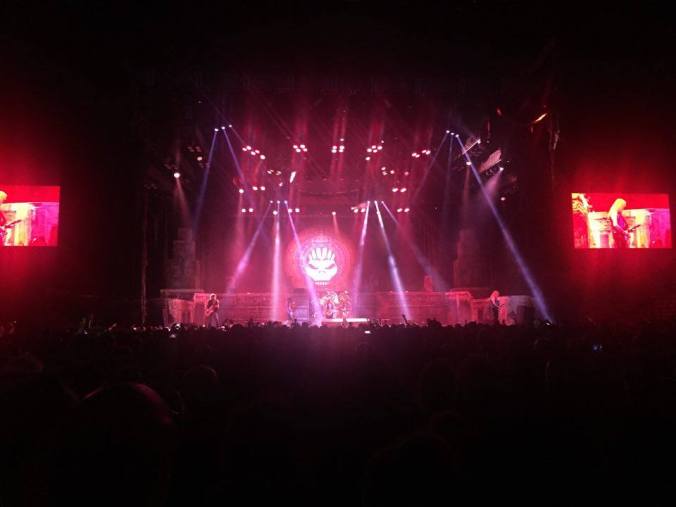 THE TROOPER
The first old Eddie backdrop of the night. Bruce has no trouble singing, which is a great relief to all of us who have been crossing our fingers that his cancer treatment would not take too much of a toll.

POWERSLAVE
Which has not been played since 2009, some seven years ago.

DEATH OR GLORY
Another new song, another one you never heard live!

THE BOOK OF SOULS
This is the 6th new track Maiden is performing tonight. And this one features one of the most demanding choruses of Bruce’s career. And he does seem to struggle with it.

And then, ladies and gentlemen:

HALLOWED BE THY NAME
With Bruce wearing the hangman’s knot. And singing, this glorious song, for the first time in a while. After coming back from cancer. He’s not knocking it out of the park, but still sounding better than he did in 1988.

FEAR OF THE DARK
Because that’s what they play right here.

IRON MAIDEN
Because that’s what they play right here: 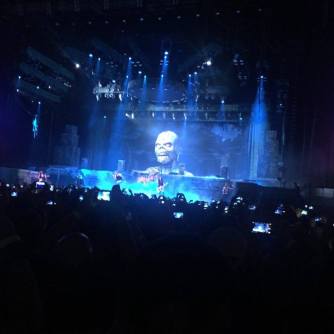 THE NUMBER OF THE BEAST
is the first encore. With the goat doing new things:

BLOOD BROTHERS
is the second encore. Which is not expected, is it?

WASTED YEARS
in a place in the set it never came close to before. Wasted Years is that kind of song, isn’t it? One that could easily replace something like Running Free or Sanctuary, or even Run To The Hills.

That’s it. Show’s over. What did you think of this set?

Wednesday, February 24 – before the show 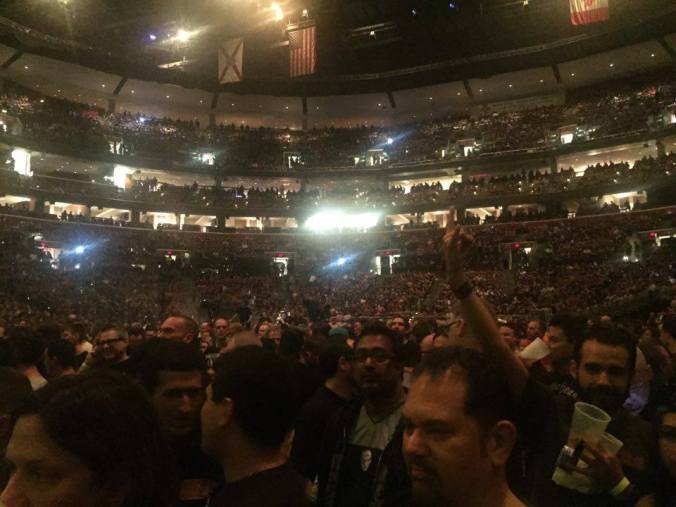 8:55 pm. It’s the calm before the storm. The stage looks like a sacrificial site.

8:50 pm. Maiden Revelations likes to enjoy a beer with the Maiden music. That beer comes at the price of 14 US dollars (!) at BB&T Center. Even Norwegians find that exorbitant, and people usually balk at our prices…

8:45 pm. The crew are racing to get the stage ready for Maiden. Guitars are being checked, staging is being readied. And the sickly green jungle color gives more than a hint of the theme that is about to be unleashed, right? We’re also starting to wonder how that circle in the middle of the lighting rig will be used… 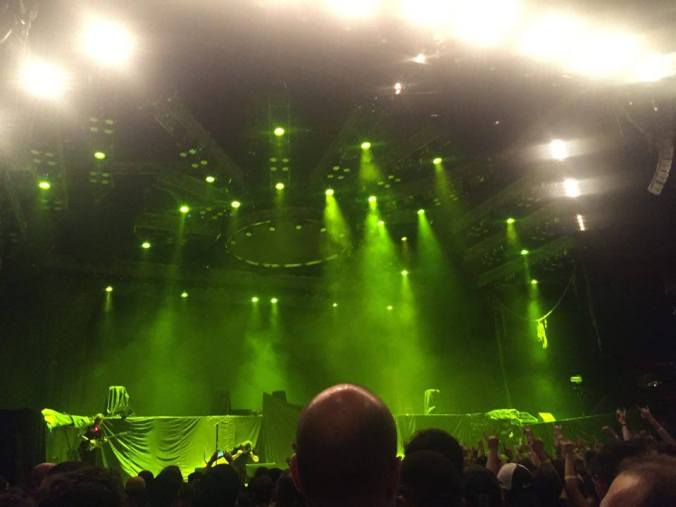 8:35 pm. The Raven Age are done! Here’s a view of the empty stage after they walked off, teasing the Maiden lighting rig:

8:25 pm. But what is hidden behind the support band? The basic rig looks the same as it always does with Maiden, no surprises there. But the lighting rig looks awesome, and jungle vines are dangling above the stage:

8:20 pm. The Raven Age is playing. Steve Harris likes to keep it in the family, and this is his son George’s band. 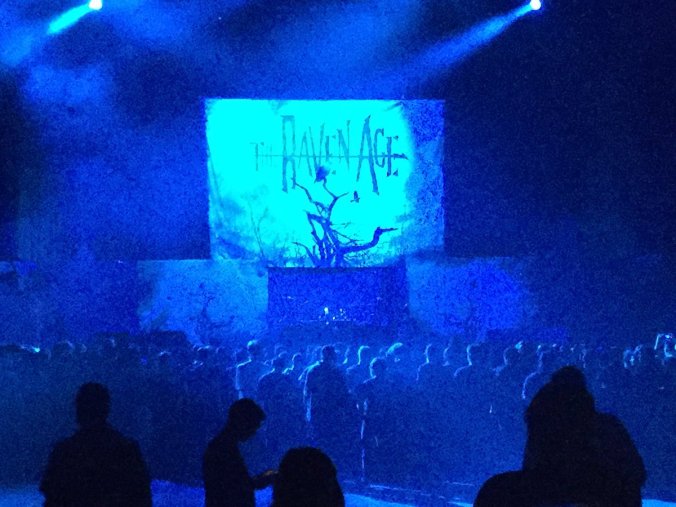 7:40 pm. Maiden’s official Twitter account is reporting that the venue is having ticket scanner issues. They also tweet that Maiden will not be on stage until 9 pm. #calm

7:00 pm. It’s been a very long time since Maiden toured with new music. Tonight they will play songs off a brand new album, and here are seven things to love about The Book Of Souls.

6:00 pm. This is where it’s happening! BB&T Center in Florida is where Iron Maiden will make what we all hope will be a triumphant return to the stage. TONIGHT!

5:45 pm. Only a few hours to go, folks. What are you most excited about? It has been over 18 months since Maiden performed live, which is their longest time off from touring since after the Brave New World tour in 2001. This time the absence wasn’t voluntary, as we all know… But don’t hesitate to let everyone know how you feel about Maiden’s return in the comments section!

5:20 pm. The party continues! It’s just about time to set course for the arena, but here are some of the other psyched-up fans that are getting seriously ready for the show:

3:30 pm. Here’s a look at some of the shirts available from the merch stand. Gotta like what Eddie serves up outside Rock’n’Roll Ribs, don’t you think?

3:15 pm. The merch stand is open! First up we take a look at the tour program. And lo, there is a date which is currently unannounced, Bucharest in Romania on July 30:

2 pm. Safety comes first when thousands of Maiden fans meet up for a metal party: 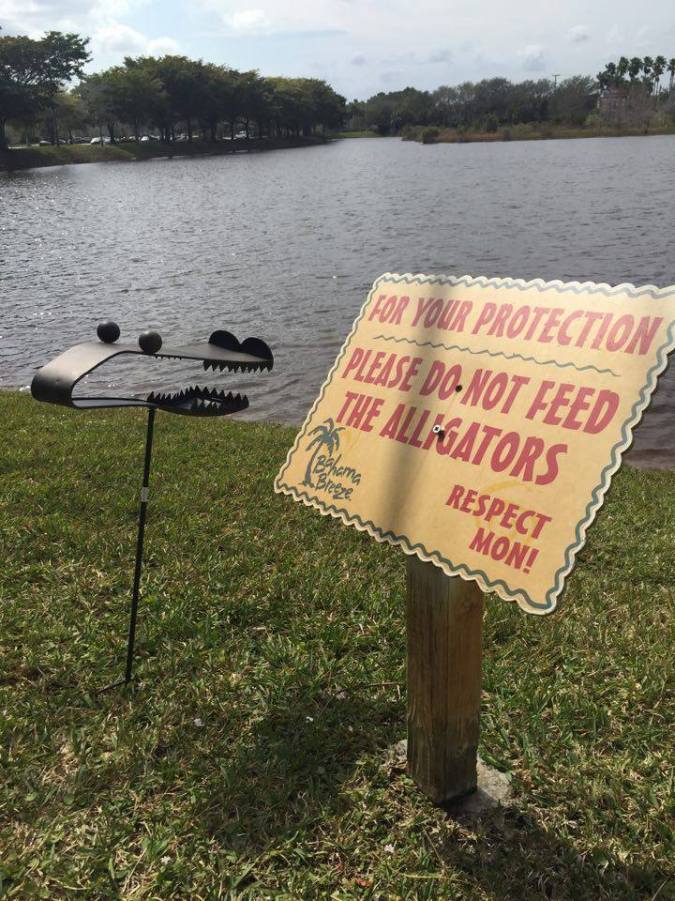 12:30 pm. How do you start your Maiden day in Florida? Why, by visiting Rock ‘n’ Roll Ribs, of course! Nicko’s restaurant serves the most tender ribs. Drool… 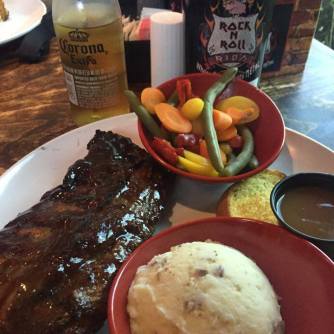 01:40 am local time. Sleep, maybe? We will report the local time of the pre-party and the show start as soon as we’re sure how everything is set up. Stay tuned!

01:30 am local time. Maiden Revelations has arrived. Getting ready for all the exciting Maiden action. It’s night time in Florida. As the Iron Maiden Facebook page says, they are ready:

Tuesday, February 23
Maiden Revelations is en route to Florida. Meanwhile, here’s a video from Cardiff, where you get a sneak peek inside the plane and some enthusiastic words from Bruce about both the plane and the upcoming The Book Of Souls live show.

Monday, February 22
We’re ready! Torgrim is flying out to Florida on Tuesday, where the greatest eagle of them all has already landed: 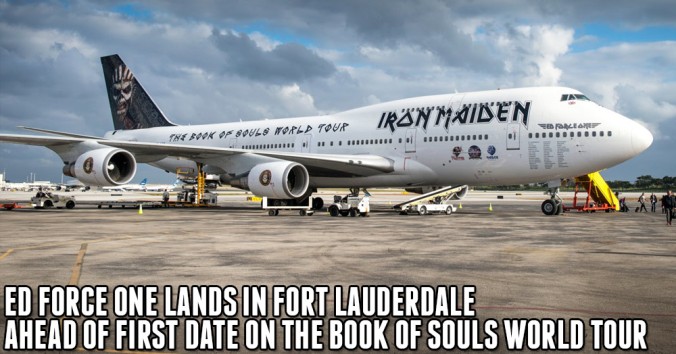 Even before Maiden’s customized 747 touched down in Fort Lauderdale to kick off the trek, the tour was already a major success, with stadiums and arenas selling out in record time. Of the 12 shows Maiden are playing in the United States, 10 of them are sold out or on the verge of selling out even before the tour starts. But more on that later. This is all about the tour premiere and what this show has in store for us!

If you want to warm up for Wednesday’s Maiden action: The Maiden Revelations live update from Barcelona and Bilbao in 2014.

Keep refreshing this page for updates, starting at the top!