This guy turns 60 today. Can you believe it? Here is some of Stephen Percy Harris’ achievements over the years. He’s been around!

Steve Harris grew up in Leytonstone, Essex. He was working as an architectural draughtsman and was training with West Ham United‘s junior team until he decided that he was more of a rocker. Steve played with various East End outfits such as Gypsy’s Kiss and Smiler until he one day found out that he had to do this on his own terms and founded Iron Maiden on Christmas day 1975. The rest is (spectacular) history, as they say. Here are some of the things Steve Harris has achieved during his well spent  60 years on this planet:

He started Iron Maiden at 19 and signed his first record deal four years later with EMI. His album debut climbed to number 4 in the British charts the following year. Spent the rest of 1980 supporting Kiss and Judas Priest. In 1981 he recorded a new album with Iron Maiden and embarked on his first world tour, including Japan. Good start! 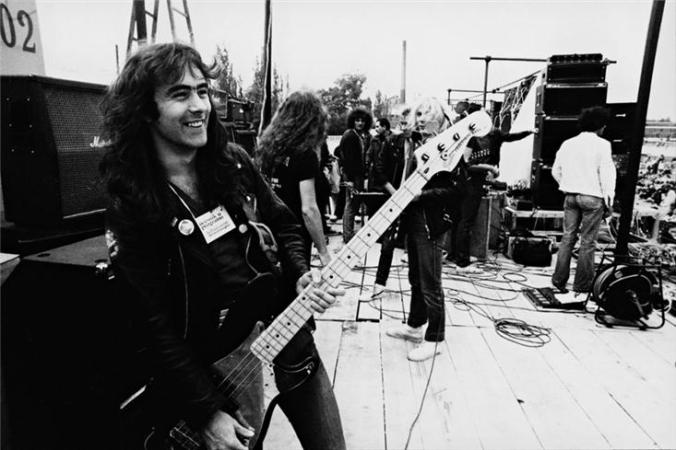 The following year Steve and Maiden recorded The Number of the Beast with Bruce Dickinson, had their first Top 10 single with “Run to the Hills”, climbed to number 1 in the UK album chart with The Number of the Beast, toured the world and headlined Reading Festival, selling a million albums in the process. So far so good.

1983: Piece of Mind. Headlined their first US tour. Some of the dates in stadiums. Sold another few million records.

At the age of 28, Steve played to 300.000 at the first Rock in Rio festival in Brazil, during their “World Slavery Tour” in support of the massively successful Powerslave album. He did it well. Queen, who were headlining, told Steve that they blew them of stage, although humble as Steve are, he didn’t let that get to his head. Later in 1985, Maiden were scheduled for 4 sold out nights at the Long Beach Arena in LA and 7 sold out shows at New York‘s Radio City Hall. Two of them were canned due to health issues. But still…

And so it goes, add a few more multi-million selling albums, namely Live After Death (one of the most highly acclaimed live albums in rock history), Somewhere in Time and Seventh Son of a Seventh Son.

Up until 1988, Iron Maiden had kept away from the infamous Monsters of Rock festival at Castle Donington in England. They wanted to do it in style. And they most certainly did. 107.000 people turned up for the event (the record still stands) and they utilized the largest PA in the history of man. At least it says so in the Guinness Book of World Records.

So what’s left for Steve to achieve after that, apart from more number one albums, world tours and spectacular headline slots at massive festivals?  How about selling 250.000 tickets to your Scandinavian stadium tour in 2008? How about topping the charts in 40 countries with your latest album, some 40 years into your career with The Book of Souls? How about traveling around the globe in your own 747 – 400 jumbo jet, playing to millions of people on 6 different continents? How about strapping on your bass in front of 60.000 people in Santiago, Chile a few hours before turning 60?

I think you’ve earned your self a toast, Steve! May you live long and prosper.

Here’s some of the songs Steve has the sole writing credit for. Not bad for a bass player!