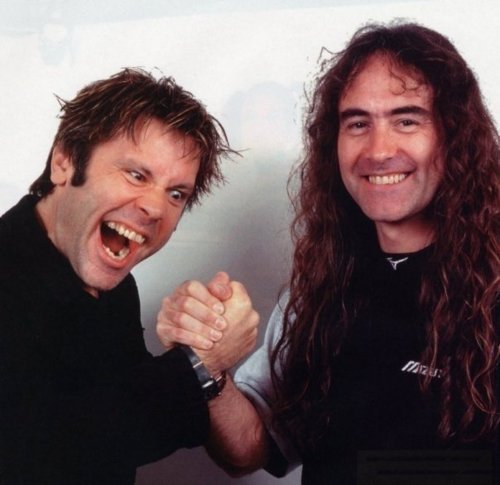 As a traumatic and triumphant 2015 drew to a close, Iron Maiden headed into a properly ambitious 2016 with a renewed sense of comradeship and brotherhood. In this feature we’re going to go all mushy on you about the greatest band in the history of music. No KISS drama, no Sabbath feet-dragging, this is all about how Iron Maiden is different. And better. And closer to all of us.

2015 started in a terrible way. Bruce Dickinson was diagnosed with cancer and underwent treatment. It got better in the spring when Bruce was given the all clear and Maiden got back to business. September then saw the very successful release of their new album The Book Of Souls, and early 2016 saw the start of one of Maiden’s most ambitious tours ever, visiting 35 countries on 6 continents with their own jumbo jet.

Some recent interviews with the band seem to highlight the bonding process that has been ongoing over the past couple of years, through the good and the bad, and for longtime Maiden fans it makes for quite touching reading. One example is the 100th issue of the official fan club magazine, another is the September 2015 issue of Metal Hammer. Maiden have had a whole new experience of being mortal, and they evidently treasure their friendship and music that much more after coming out the other side of a very dark tunnel.

A rendering of the jumbo that takes Maiden to (almost literally) every corner of the globe in 2016.

“None of us knew,” says Steve Harris about the singer’s health situation during the recording of Maiden’s new album in Paris in late 2014. “He didn’t know. He’d sung fantastic in the studio. It was scary stuff.” His friend and partner had to go into a very painful treatment that essentially means “being cooked from the inside out”, as Dickinson puts it.

All of this came at the very end of the process of writing and recording the first Maiden album in five long years, the highly acclaimed The Book Of Souls. This was Maiden’s first return to recording in Paris, where they had previously created their reunion album Brave New World in late 1999. “I loved being in Paris,” says guitarist Adrian Smith. “It was the end of the summer and it was beautiful, and inspiring all around. Everyone felt that and it really clicked.” His co-guitarist Janick Gers agrees that it was a great experience, telling The Quietus that “bands have to grow, travel different avenues, push the boundaries, and we always do.”

But before Bruce started feeling a lump at the side of his neck toward the end of those inspiring sessions, Steve was the one who had to struggle through trauma as the band got to work in their Paris studio. He lost two people close to him right at the time when writing began, a family member and a childhood friend. Steve says it was “one of the hardest times of my life, but the guys were really good about it and really positive and helped me through it.”

As Steve worked his way through the darkness at the beginning of the album, with the help of his bandmates, it was Bruce’s turn to face darkness at the end of the sessions. What he went through seems to have made a profound mark on his mates in the band.

Gers has been personally close to Dickinson for decades, and he remembers feeling a little worried that the singer kept getting antibiotics and having dental problems for no seemingly obvious reason. Gers was dumbstruck upon learning that his friend and bandmate was actually facing a cancer battle.

“We were floored,” says Dave Murray. “When we were doing the album, right up until December, there was no sign that anything was wrong at all, so when we heard in January, it was a devastating shock.” Smith concurs, and adds that “I just had a feeling deep down that I couldn’t imagine him being knocked down by anything.” Still, the question of Bruce returning to the stage was up in the air. “We didn’t even think about…” starts Adrian and trails off. “I couldn’t even bring myself to ask him if his vocal cords were alright.”

As we all know now, Bruce’s vocal cords were alright and he has gone on to deliver some of his best ever performances on the current tour. Which is saying a huge f***ing deal. But in the gloom of early 2015, the future of Iron Maiden was not at all certain. 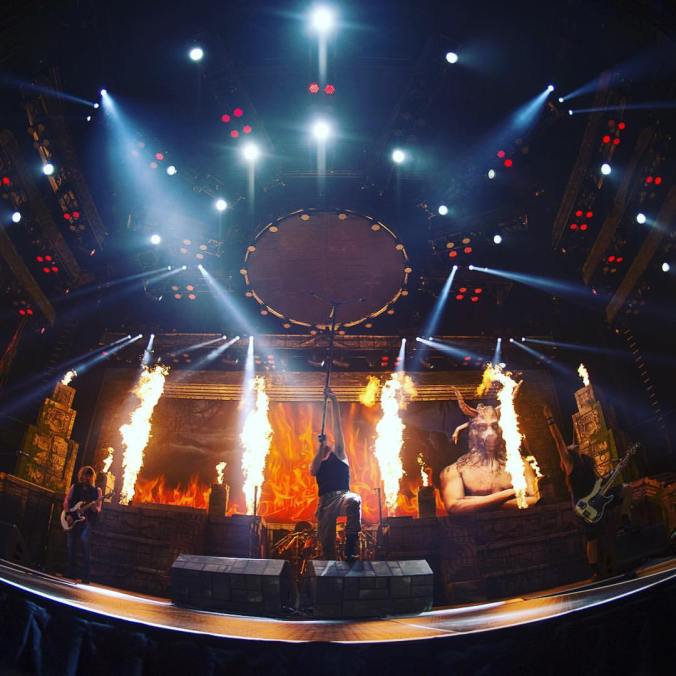 Bruce leads the charge as Iron Maiden head out on the most ambitious, and least likely, tour of their entire unbelievable career.

In the mid 1990s it seemed impossible that Steve and Bruce would ever talk to each other again, much less sit down to discuss working together again, but what a difference it made once they did. Not only was Bruce invited back to Maiden, but he and Steve have been closer since than they ever were before.

“I’ve got to say, it was probably the toughest time of my life working with the band,” says Steve about the deaths that led into the making of The Book Of Souls. “But obviously nothing to what was coming later for Bruce. He’s a very strong person, but even he… well, that’s for him to talk about, not me.”

The call came. And they talked. Bruce’s voice was battered from the cancer treatment. His brother Steve was just relieved to hear from him at all. The rest could wait. Bruce was ok, and that was the most important thing.

Bruce intones the meaning of a man’s soul, and Iron Maiden launch into the gloomy and epic opening number of their current tour, “If Eternity Should Fail”.

Harris pulls no punches when he admits that he didn’t have a great time making the new Maiden album: “There’s no point in me lying and saying I had a great time, because I didn’t.” He also acknowledges the passage of time and its meaning for Maiden when he states that “we’ve all known each other a lot of years and that’s one of our strengths, I think.” Indeed, the observer begins to see what Bruce was wanting to get back to, apart from health and family.

Bruce himself was as excited as he could be when Maiden made this album in Paris: “Because Brave New World was a great vibe, but we were just starting to get it back together then, so there was just a little bit of walking on eggshells, but not on this. This was great!” Bruce says he wants to do more Maiden albums and that he wants to record them in Paris at Guillaume Tell Studios. Maybe to beat the ghost that haunts the making of The Book Of Souls.

“I went to ‘Doctor Google’ about five or six weeks before I got the diagnosis and I diagnosed myself,” Bruce says. He was uneasy about lumps on his neck and found that they could be cancerous tumours. They were, as it turned out. But being Bruce, he decided to put it out of his mind: “Well, if I have got it, I really don’t want to know about it until I’ve finished the album.” They were just finishing the orchestral mixes for ‘Empire Of The Clouds’, Bruce’s masterpiece. Bruce finished the album. And then got a doctor in.

How do you deal with something close to a death sentence? By fighting on, it seems. Bruce has shown that it isn’t easy, but at least you should give it your best shot.

How do you react to the negative news? “Anger didn’t seem to work for me. Feeling sorry? Yeah, I went through that for a couple of days and then again, it’s not me. My doctor said to me, ‘I’m sorry, you shouldn’t have this,’ and I said ‘Yeah, but I do. Thanks, but let’s just get on with it.’ ”

Bruce’s struggle with the shadow of death affected drummer Nicko McBrain in a particular way. Speaking to The Drummer’s Journal, Nicko revealed that he has recently stopped drinking alcohol. “When the news came back that he had cancer, I was just concerned for a friend. Plus it made me think about my own situation, my own health […] When he got the ‘all clear,’ I looked at Bruce and thought, ‘here’s my mate, he’s been through hell, beaten cancer, and none of it was his fault.’ And there I was, putting myself through hell too, except I was doing it to myself with drink. So I knew I had to stop. I took a lot of inspiration from Bruce; it made me realize how stupid I was being.”

Nicko has made no promises about never having a drink again, but he is very clear that a change had to happen. And his friend Bruce was an obvious inspiration for making that change. It underlines the bond that exists between these very different people who have shared a long and adventurous life together. Bruce coming out the other end has made all of this blindingly clear.

Iron Maiden are still together. Thank God. And modern medicine.

Perhaps the most telling and touching comments over the past year or so have come from Steve Harris himself, speaking through Blabbermouth.com by way of Vorterix radio. “I’ve had probably most of my life,” he contemplates. “And there’s less going forwards than there is going back, but I prefer to look in the future. But, yeah, we’ve had a fantastic career, so if it ended tomorrow, it’s been amazing, and I can live with that.”

There was a massive crisis to overcome at this late point in Maiden’s career, and Dickinson’s friend and bandmate (and mid 90s nemesis!) is more than aware of it. It runs through him, in his very blood, as he concludes: “We can’t really replace Bruce anyway. But, thank God, we didn’t need to, and he’s fine. The main thing is that he’s okay, and he is okay. But the second thing is, obviously, now we can tour and we can make albums, and I’m sure he’s gonna be fine in the future. So, you know, he seems really well, and he’s singing well, so… Thank God that we are still together.”

It’s all about keeping the band of brothers together, on their own terms, until the day comes that they will decide their own band’s end. Like Steve says:

(All sources for quotes are listed in the text.)

2 thoughts on “FEATURE FRIDAY: Iron Maiden, a Band of Brothers”