Iron Maiden’s album catalog has been reissued many times, most recently as 180g black vinyl and digital remasters, the latter of which also appear as CDs. We took this opportunity to set up a series of reviews, and first up is the album that started it all!

The timeless Prowler opens the first Iron Maiden long player in excellent style. The production by Will Malone (or rather without him, as the band tells the story of his arrogant magazine-reading and disinterested comments) does the record few favors, and has been much maligned by band chief Steve Harris. But the energy of the band still crackles in spite of the dry sound and unhelpful producer.

The remastered 1998 CD version of this album inserted the overrated Sanctuary right after the opener, previously only included on the American pressing of the album, and a track that never matched the best of Maiden’s early output. Thankfully, the most recent vinyl, digital and CD reissues revert to the original tracklisting, where Prowler gives way to the otherwordly Remember Tomorrow, the original quiet-beginning-erupting-into-metal-fury Maiden track.

The first glimpse of Derek Riggs’ Eddie, in the artwork for the Running Free single that took Maiden on a surprise visit to Top Of The Pops in Britain.

Then comes the surprisingly simplistic and catchy Running Free. The band is on fire, their punkish energy balanced by first-class musicianship. Paul Di’Anno wails, shouts and grunts his way through the lyrics, Harris’ bass gels perfectly with Clive Burr’s energetic drumming, and the guitar team of Dave Murray and Dennis Stratton sound on top shredder form, despite the annoyingly brittle guitar sound.

In fact, Running Free cracked the Top 40 in Britain. To the lasting shock of the suits at EMI Iron Maiden were invited to play on Top Of The Pops, and were even allowed to perform live:

Even though Maiden had certainly built a strong following themselves by that point, the effect of being exposed on national television on the eve of their first album’s release should not be underestimated. The songwriting clash of Harris and Di’Anno had resulted in the perfect track for this occasion. 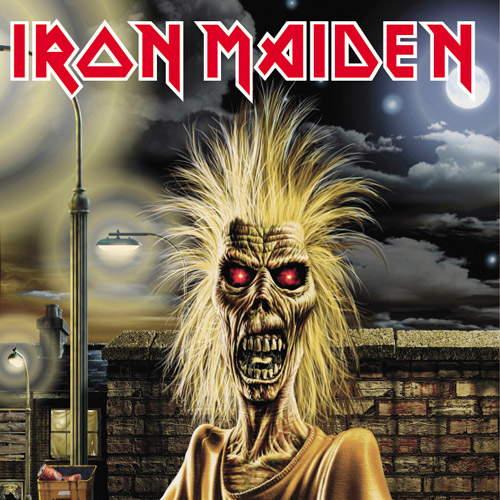 A completely unnecessary digital remake of the album cover, released with the 1998 CD remaster and since ignored.

Recorded at Kingsway Studios in London, the songs on Maiden’s debut are essentially selected snapshots from the band’s early live shows: Album highlight Phantom Of The Opera, the instrumental Transylvania, Murray’s Charlotte The Harlot (with lyrics by Harris, possibly aided by previous singer Dennis Wilcock), and of course Iron Maiden. Special mention must be made of Strange World, a Hendrix-like ballad that sounds unlike anything the band has done since.

In fact, only the subpar title track and the addition of Sanctuary to the 1998 version of the album tempers a great batch of songs that are unfortunately also let down by the poor production values. The rest of the material, and the band’s performance, is outstanding.

Read more about the creation of the Iron Maiden sound here!

The vinyl re-releases of this record, both the black 180g and the earlier picture disc, thankfully restore the original Derek Riggs painting to the album cover, Eddie the Head as seen at the top of this review, ditching the pointless 1998 remake that came with that year’s CD reissue. The picture disc gatefold has a late 1980 live shot of the band, while the disc carries the Running Free and Sanctuary single artworks. The black vinyl is a faithful reproduction of the original packaging, and it looks great.

The tradition of great Iron Maiden album packaging, and the effort to tell stories with album and single artworks, was already being established with the band’s first record in 1980. From the very beginning, Iron Maiden would be a band that wrapped their excellent music in images that built a fantasy world.

The lyrics are a fun side note in light of what the band would later produce, with several of the songs discussing the pulling of birds, the driving of pick-up trucks, the doings of London prostitutes, or the showing off of private parts to unsuspecting girls while «crawling through the bushes»…

Then there’s an interesting contrast in more introspective and pondering lyrics for Remember Tomorrow and Strange World, the latter of which earns a spot on our list of the top 10 deep Iron Maiden cuts. And there is also the first of many overtly horror-themed Maiden tunes to come with Phantom Of The Opera, probably inspired by film adaptations of the 1909 Gaston Leroux novel. The horror motif also extends to the title of the instrumental Transylvania (home of Dracula, of course) and the lyrics to perennial set-closer Iron Maiden.

It’s certainly young and raw, exemplified by the mock moral indignation of Charlotte The Harlot, while also pointing to the much more serious lyrical directions Harris and his comrades would later pursue.

Young and raw energy translates to media controversy when your mascot is depicted as having killed the Prime Minister. Sanctuary artwork by Derek Riggs.

Before the year 1980 was out Maiden would be hard at work on the follow-up, continuing to plunder their early song catalog for vinyl treatment, and eagerly developing the sound that would come to characterize one of metal’s most loved and enduring bands.

Click here for our review of the second album, Killers (1981)!

But it was pretty much all there from the start.

For a debut album, the strength of the material is stunning. At this point, Iron Maiden were at the forefront of the emerging rock movement in Britain, the New Wave Of British Heavy Metal, or NWOBHM. But much more than that, they had successfully stamped out their own territory, despite the record’s flaws. As it stands, the Iron Maiden album is a sign of great things to come.