Iron Maiden moved into the big league with the album that ushered in the band’s classic era. Everything took off with the release of The Number Of The Beast.

After Iron Maiden (1980) and Killers (1981), Maiden and their management faced a state of upheaval that could easily have been the end of a lesser band. Iron Maiden had found their sound, particularly with the coming of producer Martin Birch and guitarist Adrian Smith for their second album, but they needed a voice.

Singer Paul Di’Anno was booted at the end of the Killers tour, one of many Maiden exits in the early days. Losing the lead singer is a dangerous gamble for any band, as Maiden would learn so well at a later stage of their career, but in the case of Di’Anno they had little choice.

Click here to read about Di’Anno’s exit from Iron Maiden!

As if the singer’s departure wasn’t enough, the NWOBHM movement that Maiden somewhat reluctantly spearheaded was already waning, and a lot of people were expecting Iron Maiden to disappear.

But in late 1981, Steve Harris’ band had no intention of becoming yesterday’s news, and responded to adversity by upping their game considerably, perhaps into territory few observers foresaw. They recruited Samson singer Bruce Dickinson, created their most ambitious music yet, and released a number one record with The Number Of The Beast in March 1982.

The Iron Maiden line-up that released The Number Of The Beast in 1982: Steve Harris, Clive Burr, Bruce Dickinson, Dave Murray and Adrian Smith.

This album is home to some of the best-loved metal tunes of all time: The Harris anthems Run To The Hills and The Number Of The Beast would be chosen as the album’s singles, and his early career’s magnum opus Hallowed Be Thy Name would close the record on a spellbinding note and ultimately pave the way for many future Maiden epics.

Add to these the less well-known but equally majestic Children Of The Damned, The Prisoner and 22 Acacia Avenue, the latter two tracks benefitting greatly from Smith’s songwriting skills, and you have a bona fide heavy metal classic on your hands.

Within a mere six months, in the move from Di’Anno to Dickinson, Maiden had gone from being on the brink of breakdown, struggling to maintain their own early momentum, to so utterly transcending the contemporary metal scene that the NWOBHM label would be irrelevant to most of their future fans.

The Number Of The Beast is the sound of a band with everything to prove and the proper skills available to do it. The album was reportedly recorded and mixed in five weeks, but it definitely doesn’t sound like a rushed job.

This has a lot to do with producer Birch, who steers the ship with a steady hand, utilizing London’s Battery Studios and its in-house engineer Nigel Green to build further on the solid sound of Killers. Birch also allows the new singer room to make his mark, even pushing him to do so in spite of crushing headaches, as Dickinson would later explain. 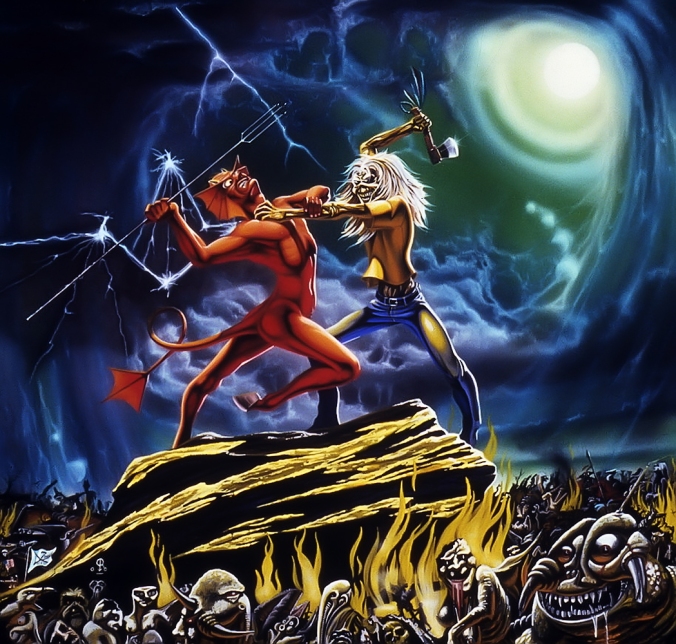 The battle is on: Derek Riggs’ artwork for Run To The Hills, picked by producer Martin Birch to be the first single from the new Maiden album.

Dickinson’s operatic singing style takes the band into waters hitherto uncharted, perfectly conveying the drama and intensity of Harris’ lyrics, which are by now straying from the sometimes crude and vulgar words of the first two records to deal with out-of-body experiences, the occult, and historical events and conflicts. Dickinson’s voice is the perfect foil for these expressions and he would from this point on be thought of by millions as the ultimate, even the only acceptable, voice of Iron Maiden.

On the visual side, Derek Riggs’ Eddie has taken a bit of a fall, dropping all the way from the streets of London to the depths of Hell. The band’s new confidence finds its corresponding visualization in Riggs’ album and single artworks, which are also perfectly designed to scare the living daylights out of parents around the globe:

Eddie won: Riggs’ illustration for second single The Number Of The Beast.

The picture disc re-release comes with a gatefold cover that opens to reveal a cool live shot of the band on the 1982 Beast On The Road tour, while the disc is illustrated with Riggs’ single artworks for Run To The Hills and The Number Of The Beast. The 180g black vinyl reissue replicates the original packaging nicely.

Musically, Steve Harris has said that he felt Killers was stronger than The Number Of The Beast, and there are certainly great things to be said about the Killers album, as our previous review argues. But the Beast album edges it for two reasons: Dickinson’s triumphant arrival, and the complete world-class level of six of the songs.

Dickinson would not be credited for any songwriting on The Number Of The Beast, the official explanation being that he was under a complicated publishing contract through his former band Samson, but he has admitted to involvement with Children Of The Damned, The Prisoner and Run To The Hills. These songs can thus be regarded as very early signs of Dickinson’s considerable contributions to come.

The record is unfortunately let down by Harris’ disappointing Invaders (the only Maiden album opener never to be played live) and the lackluster Gangland, co-written by Smith and drummer Clive Burr with lyrical input from the uncredited Dickinson.

The 1998 CD remaster’s addition of the single B-side Total Eclipse (written by Harris, Burr and guitarist Dave Murray, it is not to be found on the current vinyl or digital reissues) does not match the record’s general quality either, sounding more like run-of-the-mill Judas Priest than world-conquering Iron Maiden.

All these songs belong in a different league, one that the band has by now left behind them as they’ve started scaling the incredible heights of their 1982-1988 classic era.

Click here for our review of 1983’s Piece Of Mind!

The ideas and energy that would result from the collision of Harris, Smith and Dickinson lifted the band to hitherto unknown peaks of creativity. With The Number Of The Beast, Iron Maiden set a benchmark few bands would ever match. And they proved why manager Rod Smallwood was 100 % right about a record deal having to look to the third album.

That’s when the fun really starts.