In just over a month Iron Maiden will be kicking of their lengthy 2013 trek of the Maiden England World Tour. What can we expect? And how is Maiden doing in the world of music? It bodes for a triumphant run. Read on.The 2013 leg of the Maiden England World Tour will see Iron Maiden headlining massive festivals like Download and Graspop, a string of arena shows and gigantic outdoor gigs in stadiums, squares and fields. And by the looks of it, it’s going to be one epic and triumphant run.

Most of the arena shows are already sold out, including a double night in Frankfurt’s Festhalle, the massive Atlantic Pavilion in Lisbon, the 17.000 seater Ziggo Dome in Amsterdam and the legendary Bercy in Paris. Lodz in Poland and Zurich, Switzerland are also packed to the hilt, while Hamburg and Gdansk are on the verge of a sellout.

If that was not impressive enough, Maiden will play their biggest indoor show of their entire career at the massive new Swedish stadium Friends Arena, in front of a record breaking attendance of close to 60.000 crazy metal maniacs.

Before heading over to the States and South America, the band will do a series of stadium and outdoor shows in Eastern Europe, including Romania, Turkey and Czech Republic. 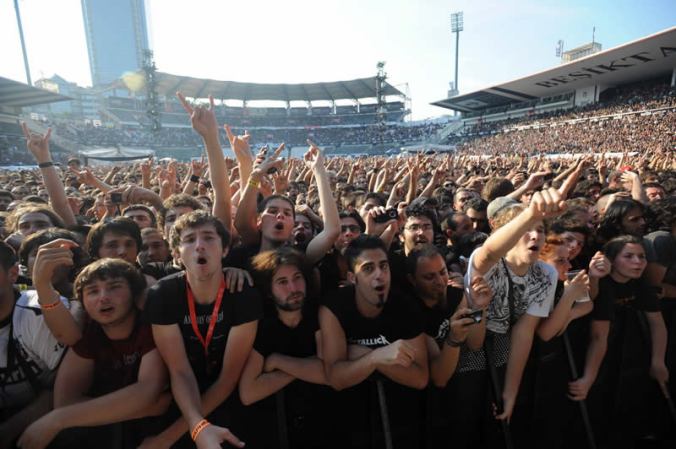 Maiden will round of the European run with a series of gigs in stadiums, squares and fields. Pictured above the BJK Inonu Stadium in Istanbul, Turkey.

And despite touring extensively in the United States for the Maiden England tour in 2012, it seems like the appetite for Maiden in the States are still increasing. The show in the massive San Manuel Amphitheater in San Bernardino, aptly dubbed The Battle of San Bernardino sold out within a day, leaving only lawn tickets left 5 months prior to the show. The arena show in Las Vegas sold out in a week, and the other gigs in St. Louis and Raleigh are packing out quickly.

Tickets are flying in America. All the seats for the massive San Manuel Amphitheatre were sold out in a day. The Battle of San Bernardino features Iron Maiden with support from Megadeth, Anthrax and Testament among others.

In September and October the band will hit South America again, including a third stop at the legendary Rock in Rio festival. The Maiden day sold out its 70.000 tickets in a matter of hours after going on sale. The band will also play the massive River Plate stadium in Buenos Aires. Even though they’ve just started the pre sale where tickets are available locally only before going on official sale May 2nd, they sold 20.000 tickets within the first two days.

Before heading home, they will also have visited the Jockey Club in Sao Paulo, Estadio Nacional in Chile where they filmed “En Vivo!” and a much welcomed gig in Asuncion, Paraguay for the very first time ever.

The question many fans are asking is if there will be a UK Tour this year. You will probably get the answer at Donington in June.

It’s exciting times indeed and we’re very much looking forward to be sharing stories, memories and experiences with all of you fellow Maiden fans out there. Will they alter the set from the 2012 tour trek in the US? Will they play “Infinite Dreams”? Will Bruce Dickinson get a new haircut, will Dave Murray sport a new guitar? We will all know within a few weeks from now. But here is our wild cards,  “Aces High” and “Running Free” might go and “Sanctuary” will be back in together with the return of “Hallowed Be Thy Name”.

See you all somewhere on tour.