You have probably registered the controversy surrounding the use of unmanned drones in military operations. The use of drones have increased dramatically under US president Barack Obama, allegedly for the assassination of terrorist leaders. But research suggests that the lethal machines are responsible for huge numbers of civilian casualties in places like Afghanistan and Pakistan.

In 2009, the Brookings Institution reported that US-led drone strikes in Pakistan killed 10 civilians for every militant. Some estimates claim that thousands of innocent people have perished in such attacks since the launch of the drone strikes in 2001, with many more likely to have been injured. 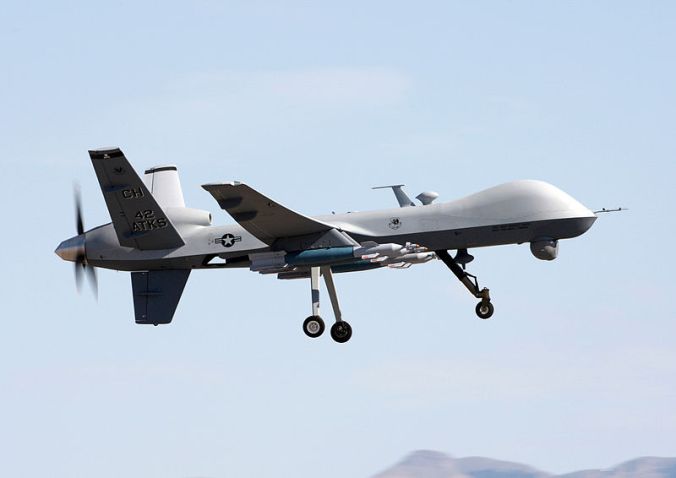 These unmanned killing machines might be responsible for the deaths of thousands of innocent people in African and Middle-Eastern countries.

It’s against this grave backdrop that rumors of Iron Maiden singer Bruce Dickinson’s involvement began to spread. The blog Dorset Eye reported that Dickinson’s Cardiff Aviation had accepted a contract with the US military to manufacture “lighter-than-air” drones, a contract potentially worth as much as $ 500 million. The blog labelled Dickinson a “rock’n’roll warmonger” in a very heated post.

Unfortunately, the only source provided for this information was an announcement on a South African Conference Speakers International website, which has since been removed. As many people will know by now, Dickinson is available to give talks about corporate innovation and team-building through such forums, and they listed a military contract as one of his business achievements.

A spokesperson for Iron Maiden have responded to NME in a written statement, saying that the entire thing is a misunderstanding that turned into “a totally inaccurate and malicious piece of writing”. NME quotes the spokesperson as stating: “Both Bruce Dickinson and Iron Maiden’s manager Rod Smallwood were early investors in, and remain great supporters of, Hybrid Air Vehicles (HAV), a company that has nothing whatsoever to do with drones, ‘lighter than air’ or otherwise!”

Specialising in heavy lift, the potential application of this in-development aircraft, known as the Airlander, can be both civilian and military. The HAV company highlights the potential in humanitarian operations as well as transport and surveillance related to energy, mining and distribution, which can open extreme environments to human activity in a, relatively speaking, environmentally friendly way.

But HAV are also open about the military operational potential of the vehicles, which is predictable given the fact that all research and development of this sort will rely in large part on military services for funding. Indeed, the prototype shown during take-off in the company’s own image gallery bears the marking United States Army.

So, this is not about Cardiff Aviation manufacturing military drones. Which always sounded completely impossible, anyway.

But it is definitely about Dickinson and Smallwood investing in a company that produces innovative air vehicles. These are being developed specifically for military heavy lift and deployment, albeit with clear possible applications in humanitarian efforts and the research and operation of energy ventures in the future.

“We oil the jaws of the war machine…” Is Bruce Dickinson, the author of 2 Minutes To Midnight, walking the line with his investment in HAV?