What would an Iron Maiden live show be without the man that drives the band? Join us for a celebration of the one and only Nicko McBrain.

The band’s all packed up and gone home to the four corners of the world, but the recently-ended Maiden England World Tour is still resonating with fans. Hugely successful, the past two years have seen Maiden’s already astronomical global fanbase grow by leaps and bounds.

Despite this, we diehards always manage to find little things here and there to criticize. All setlist and stage production issues aside, one of the most hotly debated Maiden England topics has been the tempo of the songs.

Adrian Smith has stated (most notably in the History of Iron Maiden Part 3 featurette on the recent Maiden England ’88 DVD) that the speeds at which the band were playing in the mid to late ‘80s were “choking the life” out of the songs. In addition, Bruce Dickinson was tripping over the words in many tunes which were already quite hard to sing at normal speed.

Nicko in the engine room during a concert on Iron Maiden’s Maiden England World Tour, a global adventure that saw the band hold back on tempos compared with their 1980s performances.

Now, we here at Maiden Revelations don’t like to point fingers, but one Nicko McBrain can certainly be said to hold partial responsibility for such breakneck deviations from the album tempos. Indeed, the sticksman himself has mentioned several times that he “can’t play the songs at those tempos and make it work” anymore, as the band need to be more aware of pacing.

Whether he is merely being diplomatic to Adrian, telling the truth, or somewhere in between, one thing is for sure: Nicko’s playing on the Maiden England tour has been…different. Wasted Years sometimes got close to falling over backwards, and The Trooper had Bruce (used to decades of fast vocal delivery) spitting out the words faster than the band were playing! Some numbers sounded brilliant though: The Evil That Men Do packed a heavier, meatier punch, and Bruce could finally get all the words out in the chorus of Seventh Son of a Seventh Son!

We think Nicko may be on to a winner here, but he isn’t always quite so on the money. With that in mind, let’s check out Nicko McBrain’s BEST & WORST live performances, starting with the TOP 5!

5) The Trooper (Live After Death, recorded 1985)
I must be upfront here; I’m not a fan of Live After Death. I don’t think anyone in the band is in particularly fine form, especially Bruce. However, Nicko shows a surprising amount of restraint and control on this rendition of a live favorite. In fact, they’ve played it faster and much looser in recent years! Nicko’s drumming on the ’85 version is tight, controlled, and more faithful to the original than any subsequent official release. Not to mention, he throws in some pretty impressive improvised fills leading out of the initial vocal breaks and into the second verse.

4) Be Quick Or Be Dead (Live At Donington, recorded 1992)
Boasting poor audio production, lackluster vocal delivery, and some sloppy playing, this release is generally unpopular with your average Maiden fan. Despite this, it contains some fantastic musical moments. Be Quick Or Be Dead, the opening track, is the ultimate expression of Nicko’s wild side; if anything, it’s the one song where he can play as fast as possible and get away with it.

There is also an incredible fluidity and control to his ride cymbal work and drum fills, helping keep the song in the groove as it teeters on the edge. Nicko pushes the tempo just enough here, and doesn’t let the song get away from him. Ghost notes and syncopated cymbal/snare hits remind us that Boomer got his start as a jazz/blues rock drummer, emulating the likes of the greats Joe Morello, Buddy Rich, and John Bonham.

The Donington 1992 performance is a controversial part of Maiden’s concert video pantheon, and it will soon be re-released on DVD.

3) The Rime of the Ancient Mariner (Flight 666, recorded 2008)
This has always been one of my personal favorites drum wise, because it contains so many different feels. Nicko’s pulse keeps the band driving forward through the initial sections of the song, his drum fills somewhat simplified from the original version. However, unlike some with modern interpretations of classic Maiden, Nicko’s omissions and changes to the song do not detract from it at all. In fact, this allows the band to settle into a heavier groove. All the important fills and hits are still there, they’re just slightly less frantic and skittish.

2) Sign of the Cross (Rock In Rio, recorded 2001)
In my opinion, this whole album is the pinnacle of Nicko-ness: the perfect amount of unbridled speed, an absolutely deadly right foot, and machine-gun fire drum fills that make your hair stand on end. In Sign of the Cross, Nicko’s slightly off-kilter acceleration and deceleration of the tempo conjures visions of the Mighty Maiden as a massive battlecruiser, loaded to the brim with heavy armor and weaponry. It may not turn on a dime, but it’ll do a complete 180 if you give it time.

This track is the epitome of REAL heavy metal drumming. It’s moody, it’s heavy, and it’s not perfect. But dammit, there’s something so refreshingly real about the way the drums sometimes lag behind the guitars, or get ahead of the bass.

1) Where Eagles Dare (Ullevi, recorded 2005)
What Nicko-related list would be complete without mentioning this song? From the thunderous arrival of the opening tom fill to the last, rapid-fire snare drum hits, Nicko owns it. And he should, because it was this very tune that announced to the world back in 1983 that a new man was behind the kit in the world’s greatest heavy metal band, and he was here to stay.

Click here to read more about the importance of Nicko McBrain’s arrival at the dawn of Iron Maiden’s classic era!

Nicko keeps it locked in and groovy, unlike the breakneck speeds at which Eagles was played on previous tours. Despite being a great, crowd-pleasing rocker, it’s also a triumphant celebration of everything Nicko: bombastic, single-pedal madness, head-bangingly good grooves, and epic, rolling fills that are nearly a mile long, all of which manages to compliment the other instrumental and vocal parts, and never gets in the way of the song.

So, what’s the worst of Nicko’s performances…?

It’s hard for me to find examples of truly terrible performances by Nicko, because even if he’s having an off night he can still pound out the basics and make the songs sound decent. It’s usually when he gets carried away and tries to do too much in too small a space that things go awry. That being said, I’ll give you my three least favorite live performances by the oldest, tallest current member of Maiden:

3) Revelations (Live After Death, recorded 1985)
Nicko, what were you thinking? Talk about choking the life out of a song… if there’s any Maiden tune that needs breathing room and a simple groove it’s this one. However, right from the drum entrance the song is far too fast. On top of that, the annoying little crash cymbal/hihat fills during the guitar lead around 1:20 make it seem like Nicko is getting bored. There is too much going on here that isn’t necessary, and the tempo turns what was a thoughtful, sensitive song into something almost laughable.

2) The Prisoner (Maiden England, recorded 1988)
Again, Nicko’s wandering sticks get the best of him. The intro to The Prisoner is probably about as simple as they come (excluding Run To The Hills). Nicko interprets this by throwing in a load of big tom fills and playing it way too fast. The song never really settles down, and doesn’t have the same weight it did when Clive Burr was still in the band. Happily, this is one of the tunes that benefited greatly from Nicko’s restraint on the 2012-13 Maiden England tour.

Bruce complains to Nicko that his tongue hurts, on stage during the very speedy Seventh Tour Of A Seventh Tour in 1988.

1) Wasted Years (Maiden England, recorded 1988)
When Nicko plays a simple groove, he sometimes has the tendency to speed up. I can’t think of a better example of exactly the kind of playing Adrian was complaining about than this one. During the guitar break before the solo, he tries to rein Nicko in to no avail, and the song ends up back in the upper stratosphere as H does his best to keep up during his solo. This song is one I will always skip, because it embodies perfectly the tempo issues Maiden was having in the ‘80s, and simply has none of the soul and passion that made the studio version so catchy and different.

Like a fine wine, Nicko seems to (mostly) get better with age. His newer, more groove-oriented approach to playing live has complimented some fantastic live releases (Rock In Rio and Flight 666 spring to mind), and serves the songs even better than their original drum parts in some cases. However, as evidenced by a few flubs and weird moments during some recent Maiden England shows, this new, super-restrained way of playing may not be the best direction for the band to take.

Part of the reason Nicko’s playing is so special is that fine balance between solid, driving rhythm and off-the-wall improvisation. Achieving a good balance of those two elements is what makes a Maiden show click. Hopefully, now that the band has had a chance to settle in to the new way of doing things, those little extra touches of madness will once again become a part of Nicko’s repetoire. 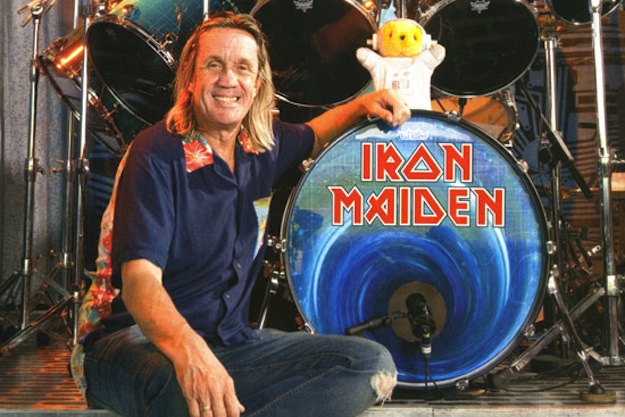 The great Nicko McBrain and his ever-present mascot, a teddy bear that has been a close witness to all the developments of Nicko’s drumming through the decades.