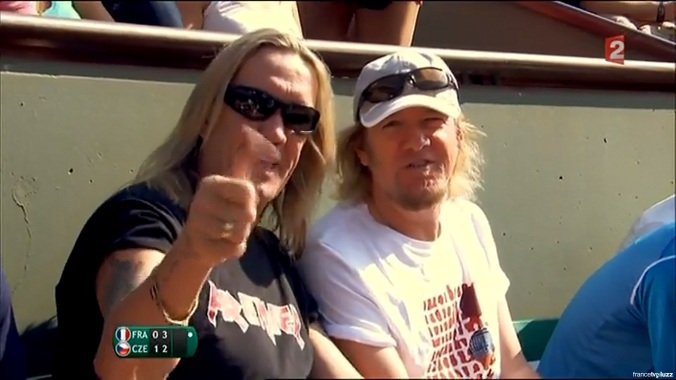 Iron Maiden forums have lit up with rumors about the new album, including the Fan Club forum on the band’s official website.

The chatter says that Iron Maiden are currently in Paris, France, where they are either rehearsing or recording their 16th studio album. To substantiate the various rumors there’s been video evidence of at least some of the band’s presence in the city.

Here’s the video of Nicko McBrain and Adrian Smith visiting the Davis Cup semi-finals on September 13:

Well, it seems unlikely that Smith, a resident of England, and the Florida-dwelling McBrain would hang out in Paris if they weren’t there for Maiden business, doesn’t it? And singer Bruce Dickinson has previously stated that there will be a new Maiden record in 2015, so it’s probably time to get going!

Steve Harris stated earlier that the reason his British Lion summer tour was cut a little short had to do with Iron Maiden activity. Maiden may have been writing on and off over the past couple of years, but it’s also possible that late summer 2014 was set aside for writing sessions and rehearsals in the run-up to recording sessions.

UPDATE September 26: Kevin Shirley posted on Facebook that he was “up early and off to the airport for an 11 AM flight to Paris.” His flight got cancelled, but at least we know that the Caveman is trying to get to Paris right now.

UPDATE October 16: Via the Maidenfans forum, guest writer Adam Hansen points out that Randy Bachman says he will be working with Kevin Shirley on his next album and claims Shirley is “probably the best rock producer around today. He just did Aerosmith and Journey and he’s doing Iron Maiden at the end of the year.”

So there it is, don’t you think?

UPDATE November 28: There have been Maiden sightings in Paris up until very recently, and Bruce also flew out of Paris when he visited Belgrade last week. At the same time, Kevin Shirley has been almost completely quiet on Facebook and has made no mention of what he’s up to professionally. We’re almost into December now, and it’s a safe bet that there will be new album information and hopefully behind-the-scenes pics and words when the postponed Fan Club Magazine number 99 arrives in time for Christmas.

UPDATE December 15: Well, the magazine has arrived in mailboxes, and … there’s no real news. Just the word that something will happen in 2015. Well, at least there’s a couple of shots of Nicko in the studio and nice teasing artwork by Hervé Monjeaud.

Anyway, producer Shirley is the closest we get to an official source on what’s going on. On December 11 he made a Facebook post from Neilly-sur-Seine, a Paris subburb, and on the same day another post on his Caveman Facebook page confirmed that he was heading back to the US after two and a half months in Paris.

So that’s it. Maiden have been recording a new album in Paris in September-December 2014. Shirley may still have overdubs and mixing to do in The Cave in the new year, but this record is surely just about done. Now we just have to wait for official word to trickle out of Maiden headquarters. Stay tuned!

If you’re not already a member you can join the Iron Maiden Fan Club right here, and get in on the speculation and sharing of rumors, and also to receive the official mag.

Thanks to IMOC member GhostofCain for the original heads up on this story in September!

97 thoughts on “Maiden at work on new album?”