The Flight 666 live album and documentary film is the offical commemoration of Iron Maiden once again becoming the biggest metal band on the planet.

After proving how much fun a retrospective Iron Maiden concert could be with the 2005 Early Days show, and then matching it with the sheer brilliance of A Matter Of Life And Death in 2006, the scene was set for Maiden’s greatest adventure to date: the Somewhere Back In Time world tour that would recreate the Powerslave stage production and celebrate the 1980s.

Tucked up in their own Boeing 757, Iron Maiden (piloted by singer Bruce Dickinson) traveled the world and brought a camera crew along with them. The resulting film was Flight 666 and this live album is billed as the soundtrack to the documentary. Which doesn’t really matter, for this record can easily be enjoyed on its own merits. 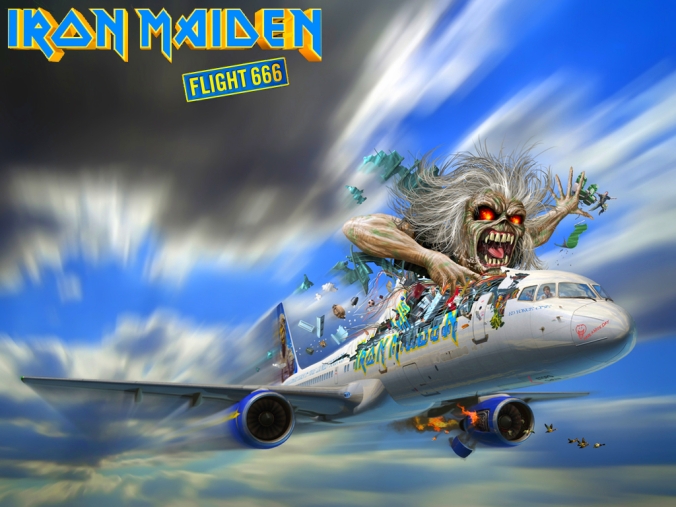 The Derek Riggs artwork of Eddie and his flight that should surely have been the album cover.

The full concert that is included on the Flight 666 DVD, accompanying the Scot McFadyen & Sam Dunn documentary that was also released to cinemas in 2009, is one of the best concert videos Iron Maiden ever made. It does have the minus of the globetrotting Ed Force One plane not being able to pack the complete stage production that graced Europe and North America on the 2008 tour, but the performances and audio production makes it one for the history books.

The set is undeniable. From the 1985-style opening of Aces High (preceded by Churchill’s Speech of course) and 2 Minutes To Midnight, to the 1988-oriented encore of Moonchild and The Clairvoyant, the list is comprehensive. Some might have opted to give Heaven Can Wait a miss in favour of something better from Somewhere In Time, but there is no argument against the inclusion of proper hits like that album’s Wasted Years or Can I Play With Madness from Seventh Son Of A Seventh Son. Except, maybe, where is Flight Of Icarus…? Another decade would pass before Maiden finally took that track out of cold storage. 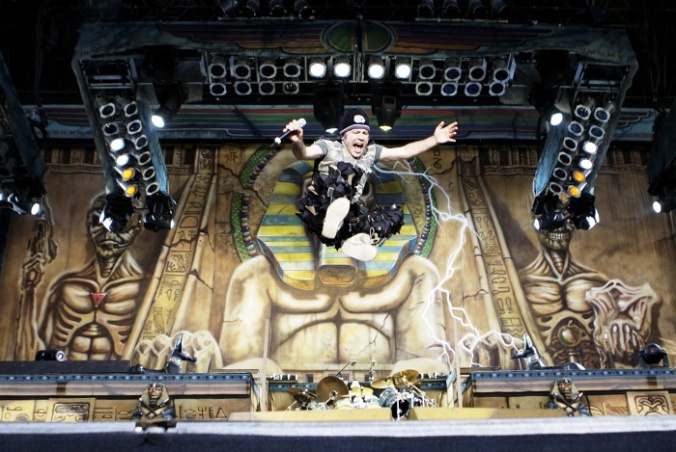 Good to be back on top.

The centerpiece of the concert is, as it was on the World Slavery Tour in 1984-85, the title track from Powerslave and the majesty of Steve Harris’ greatest ever long and intricate composition, Rime Of The Ancient Mariner. The range of what Iron Maiden could do after the return of Dickinson and guitarist Adrian Smith is revealed in its full scope when singer and band weave their way through the drama of this song with flawless execution:

As usual, there is a bit of noise and imprecision in the guitar department, which is the fault of Janick Gers, but producer Kevin Shirley does his best to disguise these flaws and wisely keeps Smith as the guitar anchor as much as possible. The fact that Maiden allow Gers to play the Smith solo in Revelations is a head-scratcher, but Dickinson covers for it by turning in what might be one of his greatest ever performances on that track, which says a great deal.

The sound overall is one of the best that Maiden ever had on a live album, Shirley having the luxury of picking performances from around the tour. Even so, there is a sense of cohesion about the flow of the set from beginning to end that far outstrips earlier attempts at combining different countries and cities into one live album, like the unpleasant A Real Live One from 1993. By this point, and with Shirley at the controls, Iron Maiden are in a different sonic world completely.

The logical absence of out-of-period track Fear Of The Dark from the 2005 Early Days tour, where Maiden played songs only from their first four albums, apparently disappointed a lot of fans. As a consequence, the song is in this 1980s set even if it doesn’t belong here, and Fear Of The Dark would from this point forever be a fixture in any Maiden set no matter what theme or period it covered. It’s a minor gripe, and the fans tend to get what the majority of us wants.

Flight Of Icarus could have been here, as could 22 Acacia Avenue, and both Children Of The Damned and Phantom Of The Opera would appear in the second year of the tour in 2009, when Maiden decided to drop some late 1980s tracks in anticipation of what would now inevitably be the subsequent Maiden England tour. But still, the set as it is leaves little to be desired.

The second of Iron Maiden’s celebrated History tours was the major watermark in their second golden age.

In the space of ten years since the career nadir of Virtual XI, Iron Maiden have turned things around in every way imaginable. The back-to-back runs of Dance Of Death (2003) into the Early Days tour into A Matter Of Life And Death into the Somewhere Back In Time tour had created a powerful momentum for Maiden that only got arrested, creatively speaking if not commercially, when they struggled to match it with their next studio album The Final Frontier (2010).

Meanwhile, in 2009 all is good. Only the unbeatable Live After Death from 1985 is better than this record when it comes to Iron Maiden live albums. Rivalling the equally thrilling Rock In Rio (2002) and Death On The Road (2005), Flight 666 is a great document of a band that is back on top of the world.